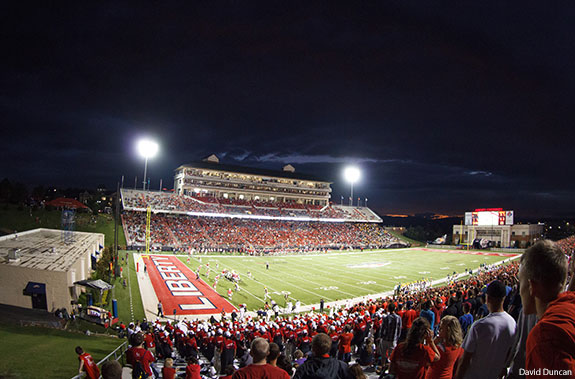 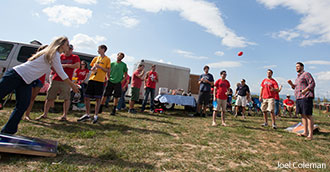 For every home football game, Liberty University Flames fans pour in to Williams Stadium for a one-of-a-kind game day experience. Although the sea of red body paint, T-shirts, and rowdy rags make up the lion’s share of spectators, a handful of  “outsiders” make the trek to Lynchburg to cheer on their team — albeit the visiting one — tailgating and hanging out right beside Flames fans.

Though the athletic field today is akin to the coliseum of old, with warriors battling it out before a roaring crowd of spectators, these days vying for points rather than heads, the Liberty Athletics game day experience reflects its Christian heritage with as much energy and passion as its screaming fans.

Chuck Burton, a respected sports columnist and blogger for Lehigh Football Nation, visited with Lehigh University’s football team on Sept. 22. He was so impressed with his experience at Liberty — from the moment he arrived on campus, to tailgating, to the end of the game — he dedicated the bulk of his game recap blog post to celebrating it.

“It seemed like everywhere you looked there were students or employees, collecting garbage, holding an elevator for you, serving patrons food … all smiling; all there to try to make your stay pleasant,” he wrote. “I was also struck by … the niceness of the home crowd to the Lehigh fans. Many, many people were not only willing to heap respect on Lehigh's team, but also showed a lot of football knowledge of their Flames as well. These were not just eager fans — they were eager fans who knew something, and talked about the night's matchup without seeming like they were ready to deck you.”

Burton was stunned with the friendliness of the students, many offering him free items such as stickers, wristbands, and even donuts, which he said was a “first for me at a football tailgate.”

He was also struck by the quality of Liberty’s facilities: “As a football fan, I couldn't help but be dazzled by the entire athletics complex.”

Liberty Mountain Snowflex Centre, Thomas Indoor Soccer Center, and other campus amenities caught his eye before he even made it to Williams Stadium, which Burton had nothing but praises for (and even put in a few suggestions to Lehigh’s athletics director). From the press tower to the explosive display of fog, shooting flames, and fireworks at the team introductions, Burton found himself captivated.

“As FCS game days go, this one was tough to top — and I've experienced quite a few of them,” he wrote.

Burton’s written account describes what countless other visitors have come to discover when arriving on campus.

Another group who visited during the Lehigh game expressed similar sentiments as Burton, this one a pack of Nebraska Husker fans supporting Flames Head Coach Turner Gill, who was a former standout player and coach at the University of Nebraska.

“We enjoyed the interaction with Liberty fans and students before and after the game. Everyone was hospitable. We also enjoyed a fantastic game,” said Gordon Bernhardt, who was among the Nebraska fans.

Bernhardt and the group used the game day opportunity to reach out to a local boys home by providing tickets to the game for at-risk juveniles from Lynchburg’s Opportunity House.

Martin Cox, casework supervisor for Opportunity House, told Bernhardt how thrilled the boys were with the experience and how well they were treated.

Even before visitors step on campus, Liberty does everything it can to ensure they feel welcome.

“Before I picked up my tickets at the office, I was impressed with how helpful and friendly everyone was,” said Willie Walden, who organized a group trip for Norfolk State fans for the Sept. 8 matchup.

“From the time we picked up our tickets at the ticket office, the experience was just great. The parking, the police, the friendly people at the ticket office, everything was in place when we got there. … After the game people were saying what a great game it was, and ‘have a nice trip back, come back again;’ it was a great experience, I really enjoyed the whole day there.”

The Flames football team, hot off a three-game win streak, heads to Coastal Carolina this weekend for a Big South Conference matchup. Liberty returns to friendly turf Nov. 3 to face off against BSC foe Charleston Southern. Kickoff for both games is at 3:30 p.m.