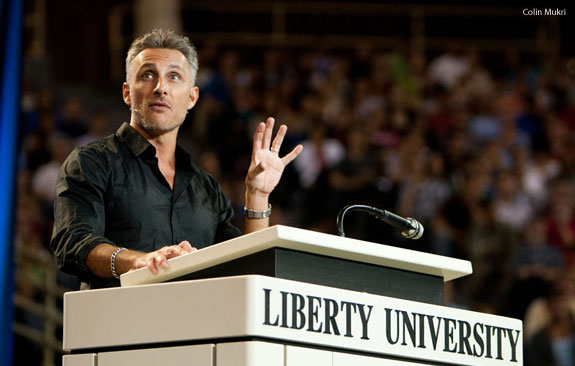 Pastor and bestselling author Tullian Tchividjian, grandson of the Rev. Billy Graham, returned to Liberty University on Monday, inspiring students at Convocation to return to the basic foundation of the Gospel, focusing on Jesus Christ rather than themselves.

“The truest measure of Christian growth is when we stop spiritually rationalizing the reason we are taking our eyes off of Jesus and are focusing on ourselves,” he said.

Tchividjian is the pastor of Coral Ridge Presbyterian Church in Fort Lauderdale, Fla. Several Liberty students have served as interns with him.

He is also the author of three books, “Do I Know God? Finding Certainty in Life’s Most Important Relationship,” “Unfashionable: Making a Difference in the World by Being Different,” and “Surprised by Grace: God’s Relentless Pursuit of Rebels,” which he signed for students after Convocation.

On Monday, he preached on Mathew 14:22-35, when Peter joins Jesus as He walks on the water but falls because of his lack of faith. Tchividjian said the main reason people “sink” like Peter is because they take their focus off Jesus.

Tchividjian said a common misconception is that “it took God to get you in, but it takes you to stay in.” He encouraged students not to miss the essence of the Gospel and not to “justify narcissism.”

“It is never ever honoring to God when we take our eyes off of Christ, the author and finisher of our faith, and center our eyes on ourselves,” he said.

Quoting Martin Luther, Tchividjian reminded students it is easy to get distracted and forgetful: “I have to preach the Gospel to myself every day because I forget it every day.”

Tchividjian and his family have had a long-term relationship with Liberty and the Falwell family. The Rev. Billy Graham gave Liberty’s Commencement address in 1997. His son, Franklin Graham, founder and CEO of Samaritan’s Purse, was the keynote speaker at Liberty’s Baccalaureate service in 1996. The Graham family was present for the funeral of Dr. Jerry Falwell, Sr. on May 22, 2007, where Franklin Graham spoke.

In the past two years Anne Graham Lotz, Tchividjian’s aunt and Graham’s second daughter, has spoken in Convocation and filmed a book series on campus.

Five of Billy Graham’s grandchildren and three great-grandchildren have attended Liberty, and another grandchild, Basyle, Tullian’s brother, is a professor at Liberty University School of Law. Tullian Tchividjian said he hopes his oldest son, Gabe, a senior in high school, will attend Liberty next fall.