Furthering the Gospel in Cuba: Professor speaks to 500 pastors at conference 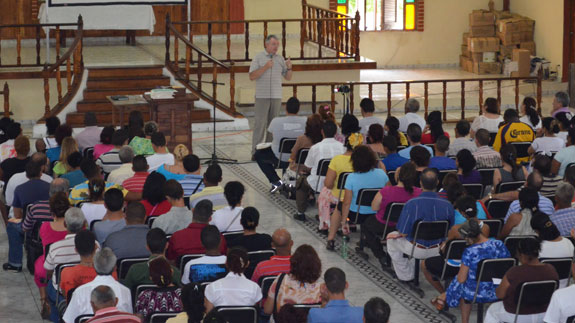 Dr. Don Fanning speaks at a pastors’ conference in Cuba earlier this summer.

Dr. Don Fanning, chair of Liberty University’s Department of Global Studies and director of the Center for Global Engagement, recently had the opportunity to minister to 500 pastors in Cuba.

For Fanning, the trip, which took place May 28-June 1, wasn’t that much of a culture shock as he ministered for 30 years in Latin America. It was, however, his first trip to the island nation, a rare opportunity and one for which he was grateful.

Fanning was granted a religious visa to teach his course on the book of Romans at a pastor’s retreat in central Cuba, as well as at a few churches in Havana, the capital. He converted the textbook he uses to teach Romans at Liberty to Spanish and provided it for the pastors.

Though transportation is a challenge in Cuba and few people own cars, pastors travelled from all over the island, some up to 20 hours away, for the conference. The pastors were provided with three meals a day and lodging at the retreat center, a rare luxury for them.

“Their commitment was just amazing, their motivation was incredible,” Fanning said. “If our students could catch that perspective, classrooms would be totally different.”

He challenged the pastors to take on the task of increasing Cuba’s evangelical population, which now is about 9 percent, to 50 percent of the country’s population.

“There is a real openness to Christianity,” Fanning said.

“Most Cubans have an amazing spirit. They have a wonderful, positive outlook, even though life in Cuba is difficult,” Waters said.

Waters explained that the average income is about $1 a day and the pastors do not always get paid for ministry. Medical doctors, engineers, veterinarians, and architects were among the professional vocations of some of the pastors in attendance.

“The pastors have freedom to preach the Gospel within their churches. Their outdoor activities are more restricted, but you can get permission for an outdoor event,” Waters said.

He said ministering in Cuba is a privilege and that the government has been supportive because of the way the group has approached ministry.

“We stick to the Word. We don’t meddle in their politics, we feel like our purpose in being there is to support these pastors and encourage them.”

Waters said that when Fanning taught Romans 13, which talks about submitting to governing authority, the people “were on the edge of their seats.”

Fanning challenged them, “Never depend on your government, make your government dependent on you. Show them that you, of all of the people on this island, are the most efficient, the hardest workers, the most dependable people that they will ever run into. That is the Christian ethic.”

He said the apostle Paul never said a negative word about the government.

“It was always positive — pray for them, for peace, and the furtherance of the Gospel.”

Waters said it was a blessing to have Fanning participate in the conference.

“To have somebody of Don’s caliber, who has not only served in Latin America, but is fluent in Spanish and has all the credentials (he has), it was just phenomenal. And the way God brought it together was just amazing.”

He said this was probably one of the larger events that Action International and Mira Ministries International have seen in Cuba.

Waters said Action International is the only group allowed to work inter-denominationally in Cuba, because of its cooperation with the government, and that about 40 denominations were represented at the conference.

Waters has two daughters who are currently Liberty students and are heavily involved in ministry. In January, they went on a missions trip to the Ukraine.