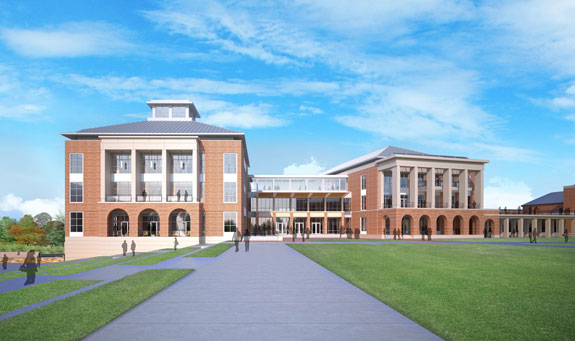 This is an artist rendering of the new Jerry Falwell Library, currently under construction at Liberty University.

As construction continues on the Jerry Falwell Library at Liberty University, a capital campaign is proving successful as more members of the Liberty family are signing up to be a part of the school’s largest building project to date and honor its beloved founder.

Since April, more than $400,000 has been raised. Many of those donations have been through the purchase of engraved bricks that will line the walkways at the prominent entrances to the library.

The bricks, available in three different sizes, record the achievements and gratitude of those whose lives have been touched by the university.

Through May 31, the university is offering a discounted price of $125 on the standard-sized 4-by-8 inch bricks (regularly $150). Bricks can be ordered online or by calling (877) 485-8945. For more information, email nameabrick@liberty.edu.

Many alumni have joined the campaign as a way of giving back to their alma mater. Even Liberty’s most recent graduates have decided to make their mark. The Class of 2012 chose the library as their senior class gift, a tradition at Liberty. Graduates donating $20 or more wore a special green cord at Commencement to show their support. They have raised $19,000 through the purchase of commemorative bricks.

The campaign has already secured more than $270,000 in naming opportunities from faithful donors for more than 70 different areas in the library, including: the four-story book tower, automated book retrieval system, grand entrance hall, graduate and faculty commons, technology center, lakeside atrium, terraces and balconies, a newly created lake and many other high-profile spaces.

Longtime supporter Leona Fuqua said she was excited to hear the news that a building would be named in Falwell’s honor. She has listened to his sermons since the 1960s and has witnessed his vision for the school becoming reality.

“I feel like Jerry Falwell, Sr. was a Godsend. He wasn’t just a great preacher; he was a great person,” she said.

The new four-story, 170,000-square-foot addition at the heart of Liberty’s growing campus is scheduled to be completed in late 2013. With the theme of “Honor the Past. Embrace the Future,” the welcoming and innovative Jerry Falwell Library will further energize Liberty’s mission of Training Champions for Christ.