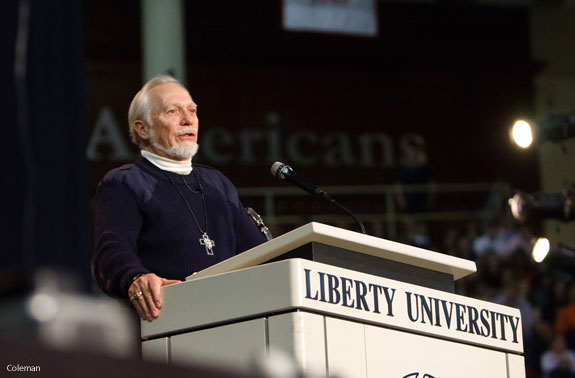 Douglas Gresham, a producer of The Chronicles of Narnia films and the stepson of C.S. Lewis, imparted some basic spiritual truths to Liberty University students at Monday’s convocation.

He spoke about what it means to have the name Christian.

“Believing in Christ is not sufficient today to be a Christian,” he said. “… It is also essential to believe Christ, believe what He taught, what He told us to do and then do it.” 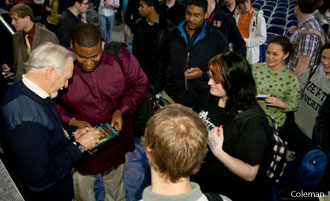 He spoke about learning to discern what God is calling us to do, and not acting out on our own ideas.

“If you do what the Lord wants you to be doing, you’re going to be good at it, and it will be very rewarding.”

He said another essential part of living a Christian life is the responsibility to help others. Gresham and his wife headed a ministry in Ireland for many years, counseling women who had abortions, people dealing with child abuse and other family counseling issues. Gresham’s speaking engagements, including his trip to Liberty, help raise money for his charity fund that supports families dealing with tragedy.

“I believe very firmly that one of the Christian’s astute responsibilities is to go through life, day to day, always trying to be or trying to provide answers to other people’s prayers,” he said.

Gresham also spoke about moving to England and meeting Lewis as an 8-year-old boy who was already very familiar with the high adventures of Narnia.

“The man was on speaking terms with my King Peter. … I expected a knight wearing silver armor and carrying a sword. … It was absolutely nothing like that at all. … He was dressed in the most shabby clothes I had seen in my life, but his huge personality and his great sense of fun soon eradicated any physical deficiencies that might have been in his appearance. I learned that sometimes we can lose an illusion and gain a treasure. … I gained what became a very fine stepfather.”

He spoke about his mother’s battle with cancer, her death, and then Lewis’ death three years later, when Gresham was 18.

At the end of his talk, he did a question-and-answer session with students. Questions ranged from whether the Chronicles of Narnia are a mere allegory, to if he had met J.R.R. Tolkien, to whether all of the Narnia books will be made into movies.

He said the Narnia books were certainly inspired by someone bigger than his stepfather.

“While Jack [Lewis] wrote these stories down, I have come to believe that the real author of them was the Holy Spirit of God. You can’t have a series of books which make the kind of changes to the world the Narnia Chronicles have made … unless God is really close behind it.”

Gresham was a co-producer for The Lion, The Witch, and the Wardrobe and Prince Caspian, and executive producer for The Voyage of the Dawn Treader. He represented Lewis’ estate during the production of the films, and was involved in the merchandising decisions for products related to the Narnia film franchise. He is the author of “Lenten Lands: My Childhood with Joy Davidman and C.S. Lewis” and “Jack’s Life: The Life Story of C.S. Lewis”.

Gresham will be on campus all week, speaking to a variety of classes, from Film & TV History (Gresham spent many years in broadcasting), to philosophy and Christian Poetics. He will also meet with theater students, speak in a faculty convocation and participate in a speaker’s forum at the School of Law.