Liberty University, Thomas Road Baptist Church and the gospel music industry have lost a great friend. Doug Oldham, a legendary gospel singer who played an important role in Liberty’s history, went to be with the Lord on Wednesday, July 21.

Oldham, 79, was a close friend of Liberty’s founder, the late Jerry Falwell, Sr.

“My father and Doug Oldham were an evangelistic team who brought the gospel to nearly every home in America every Sunday morning on the ‘Old Time Gospel Hour,'” said Liberty Chancellor Jerry Falwell, Jr. “The names Jerry Falwell and Doug Oldham were synonymous as Billy Graham and George Beverly Shea. Doug Oldham’s family remain an important part of our team here at Liberty University and Doug will be greatly missed. His passing represents the end of an era at Thomas Road Baptist Church and Liberty University.”

The Rev. Jonathan Falwell, senior pastor at TRBC, said Oldham has always been an important part of the church and the Jerry Falwell ministries. 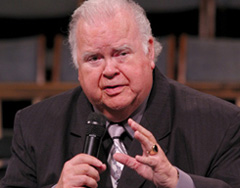 “Some of my earliest memories of TRBC services are of Doug Oldham in his bowtie singing ‘The King Is Coming’ and ‘A Rich Man Am I.’ His booming voice and tender heart spoke to millions through the years,” he said. “God used Him greatly. He will certainly be missed, but I know that earlier today there was a grand reunion in Heaven of a pastor (my dad) and his soloist (Doug) worshiping at the feet of the One they so faithfully served.”

Paula Johnson, Oldham’s daughter, is a Liberty alumnus and a staff member at TRBC. In an interview with the Liberty Journal in 2007, she recalled her dad as a “tireless worker” who traveled all over the world with his gospel music in the 1970s. In Liberty’s early years, he traveled by bus with the Rev. Jerry Falwell to church and school auditoriums as they raised money for the new Lynchburg Baptist College in the summer of 1971.

“Dad had a bus and he did the rallies to help raise funds to start [what would become] Liberty University,” she said. “Dad was the singer and Dr. Jerry would raise the money and preach.”

“I remember my father calling me into his office one day in the late 1960s and playing a tape recording of a new singer that he was inviting to Thomas Road Baptist Church. He had a speaker in the corner of his office that was bigger than a large refrigerator. The reason I remember the day so well is because the singer whistled the first verse of the song, ‘A Rich Man Am I.’ As an 8-year-old boy, I was very impressed. Doug Oldham was not the the typical gospel singer that you would find in a Baptist church in the South in those days. Doug and his music were decades ahead of his time. His unique style of entertainment and authenticity enabled him to communicate the gospel message, often through his own testimony, as no other musician could do.”

Oldham was inducted into the Gospel Music Hall of Fame in 2006.

The year after the award, TRBC bestowed its own honors, presenting Oldham with the first-ever Lifetime Champion Award for his years of Christian service, and Liberty University also named a remodeled room in the Fine Arts building “Oldham Recital Hall,” honoring him at a faculty festival and ceremony there when the work was complete. The same anonymous donor who made that renovation possible also donated money to start the Doug Oldham Music Scholarship program at Liberty.

The awards are many, but when he was once asked what his top accomplishments in his life are, Oldham simply responded: “I just reckon people who have found the Lord, because you don’t sing for the awards, you sing for the Lord.”

Family, friends and fans of Oldham poured into Thomas Road Baptist Church on Monday, July 26, to pay their last respects to the gospel legend whose career spanned five decades and whose music stirred the hearts of millions.

“I would look at [him] own the song, deliver the song, every night, and I was amazed.”

Gaither said Oldham was one of the most generous people he had ever met, always treating 20 or more people to a celebratory meal after a big performance.

Recalling Oldham’s bigger-than-life persona, TRBC worship leader Charles Billingsley said Oldham had “big dreams, and a big voice, and he accomplished many big things.” Honoring a request from Doug to sing at his funeral, Billingsley led the crowd of more than 1,000 through a medley of Oldham favorites, including “He Touched Me,” “Through It All” and “Because He Lives.”