At Liberty University the final week of classes is a time of anxiety, sleeplessness and for several graduating seniors, relief. Graduation is an accomplishment many have worked hard to attain. The four years leading up to graduation are all in preparation for careers and continuing education in the hope of a bright future. At Liberty, students cling to exciting traditions to get them through the week leading up to graduation. 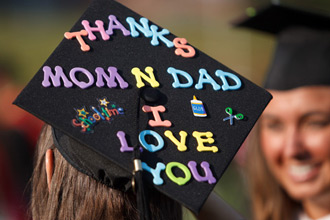 Cap decorating
Several seniors, either individually or as a group, partake in the tradition of decorating their graduation caps for the big day. It is a way of personalizing their graduation attire with whatever creative design they choose. Some script their initials aside a catchy design; others display personal messages, such as “Thanks Mom and Dad!” or “At Last” atop their caps.

Senior Communications major Kristen Riordan threw a cap-decorating party with about 10 friends. Riordan explained her design theme: “I applied ribbons and rhinestones to mine to reflect my personality! I also wrote out, ‘Time to Fly,’ depicting this transition in our lives.”

Decorating of the Spirit Rock
Many seniors decorate the “spirit rock” on campus in honor of their collective accomplishments. The rock is the only rock at Liberty that students are permitted to paint. Typically adorned with messages regarding birthdays, engagements or hall rivalries, during graduation week the rock is covered with congratulatory messages for the graduating class. Students should be happy to see their artistic expression remain for more than an hour during this high-energy week.

“Decorating the rock is really the student’s way of expressing themselves publically in a creative way,” said senior accounting major Shanna Kormanik. “It is an iconic aspect of Liberty and has been a part of my experience throughout the years.” 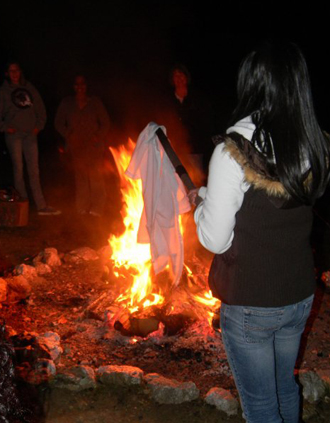 Nursing students burn scrubs
Senior nursing students are known for their ceremonial tradition of scrub-burning. It is symbolic of freedom from the years of long nights of studying. Students gather at the home of the dean of nursing, Dr. Britt, for a bonfire to collectively torch their scrubs with an air of great satisfaction.

Senior nursing student Sarah Hacking said, “It’s freedom! In the hospital we are recognized by our uniform and so burning our white scrubs means that we no longer have to label ourselves as student nurses.”

Nursing students are also known for adorning stethoscopes around their neck during the graduation ceremony. 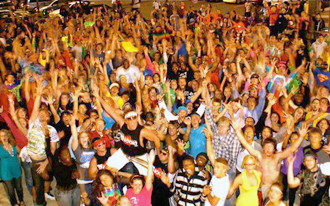 Finals Week Rave
Many seniors participate in the Finals Week Rave in front of the Arthur S. DeMoss Learning Center. The event acts as a break for many students who endure hours of studying and test-taking during the week of final exams. The event drew several hundred students and involved a session of prayer for about 45 minutes, followed by 15 minutes of students jumping to techno music while wearing crazy colorful costumes.

Communications major Joseph Marcus said, “It was definitely an enjoyable experience! It was a blast being able to ‘rave’ the stress of finals week away!” 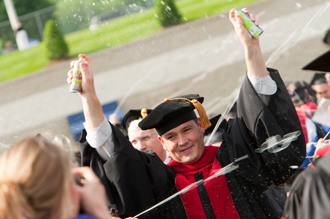 Silly string at Commencement
For many years graduates have “silly-stringed” their professors while making their honorary walk to their seats at Commencement. In recent years, the professors have wised up and now join in on what has become a silly string battle. It is the element of youthful fun and excitement that one could expect from any Liberty event — even graduation.

Joshua Rockey recounts his graduation five years ago. “My graduation was the last time they had it in the Vines Center. We silly-stringed the professors as they walked by.”

Beach ball toss
Some seniors choose to bring entertainment to the ceremony with beach balls. Liberty alumnus Dane Borkovec reflects upon his graduation ceremony, “For our graduation we had beach balls that we threw up during the Commencement. There was a small group who did it.” He recalls that one of the beach balls was about 4 feet wide.