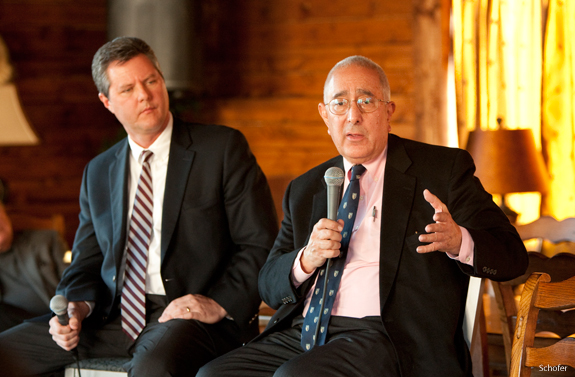 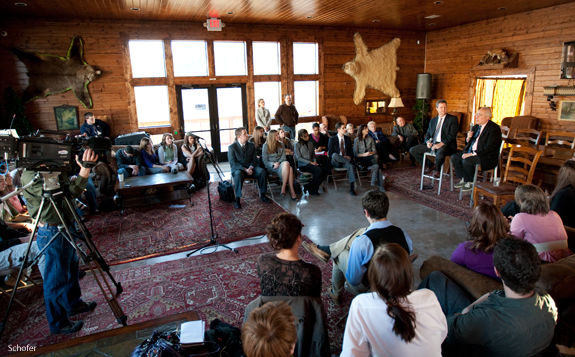 When Ben Stein, well-known economist and actor, visited Liberty University in May 2009 to deliver the Commencement address, he was thoroughly impressed with the student body.

“Liberty is the friendliest place I’ve ever been,” he said. “When I came for the Commencement I just fell in love with it.”

Falwell introduced Stein to about 50 students, who were appreciative of the opportunity to meet one-on-one with someone as prominent and influential as Stein. “He is a welcomed guest on our campus and a student favorite,” Falwell said.

To students, Stein may be more well-known for his monotone professor role in Ferris Beuller’s Day Off or the feature face for the Clear Eyes commercial; but what was more prominently discussed at the event were his roles as an economist, lawyer, columnist and political speech writer.

Stein, who is Jewish, discussed a variety of issues, including entertainment, science, abortion and public service. Yet the idea that God should be at the center of students’ lives was consistent throughout.

“If you are educated to the idea that two plus two equals four, those are fine facts to know, but a much better fact to know is that God is up there to guide you,” Stein said. “If you pick that up and apply it to your life, life just makes sense.”

Stein cautioned students of the harsh environment they will be facing as believers in today’s society. He commended LU saying, “Liberty students will not just accept the status quo, but are encouraged to challenge [it].”

Falwell asked Stein about his recent incident with the “New York Times,” where his monthly column was terminated. Falwell jokingly asked if his appearance at Liberty’s Commencement had anything to do with the demise of his column.

Stein replied by stating what he believed to be an underlying reason for the transition — his views as a believer in God. This was just one example of what he warned Liberty students of — that having a God-centered view in today’s society requires “a thick skin.”

Even as an entertainer, Stein said staying true to your self is important. He related a story of being in an episode of TV’s “MacGyver,” where he was shooting at a suspect while running down an airstrip. After shooting the scene, the directors told him he “looked like a nerd.” He said, “That’s what I am.”