After months of anticipation, Liberty University’s most innovative recreational facility made its public debut on Saturday, Aug. 29. LU christened the Liberty Mountain Snowflex Centre, its snowless ski park, with a grand opening ceremony. The facility’s completion makes it the first in the U.S. composed of Snowflex, a synthetic material designed to simulate the effects of snow. 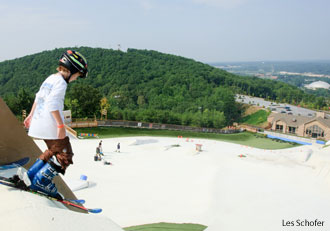 About 3,000 members of the Liberty community and general public, as well as local and national media, gathered on the slopes to witness the official launch of this unprecedented attraction. The dedication began with opening remarks from Chancellor Jerry Falwell, Jr., followed by Brian Thomas of Briton Engineering, the inventor of Snowflex.

“We’re just proud to be the only university in the world with its own Snowflex ski slope,” Falwell said. “When students are well-rounded, we believe they perform better academically if they have outlets like this for good clean fun and recreation. We’re happy not just for what it will do for Liberty University, but what it will do for the whole community.”

Thomas called the accomplishment “the most exciting moment for [Briton Engineering].”

“Since the launch of Snowflex, we have been lucky enough to have worked on quite a few different projects around the world and I’ve been welcomed in places as varied as Hong Kong, Lebanon, Spain, France and Denmark. However, I have to say the reception here has been the best yet,” he said.

During the ceremony, Falwell introduced two important donors: Jay Stein, an Arizona businessman who helped kick off the Snowflex project, and Dr. Al Barrick, a longtime Liberty supporter and friend of Dr. Jerry Falwell who donated his wildlife trophy collection to Liberty, now displayed in the new Barrick-Falwell Lodge at LMSC.

“This is a great day for Virginia and it’s a great day for Liberty,” Bolling said. “But I hope that in the midst of this day we will really remember in a very special way the guy who had the foresight so many years ago to begin this whole effort that ultimately brings us here today, and that is a good friend of mine, Dr. Jerry Falwell.”

As university officials and distinguished guests cut the ceremonial ribbon, skydiver Jim McCormick kicked off the snow sports action as he leapt from an airplane onto the main slope and skied downhill. Twenty-four pro skiers and snowboarders from the U.S. and U.K. put on an amazing aerial display, wowing the crowd with the big-air stunts and high-flying maneuvers. Following the freestyle frenzy, the slope opened to students and the public for skiing, snowboarding and tubing.

Learn how Snowflex is changing the Lynchburg community: read coverage of the event from “The News & Advance.”

“We don’t really have Greek life here. We don’t have co-ed dorms. We don’t have these wild beer parties,” he said in the article. “So you need to give kids a productive and clean way to enjoy themselves.”