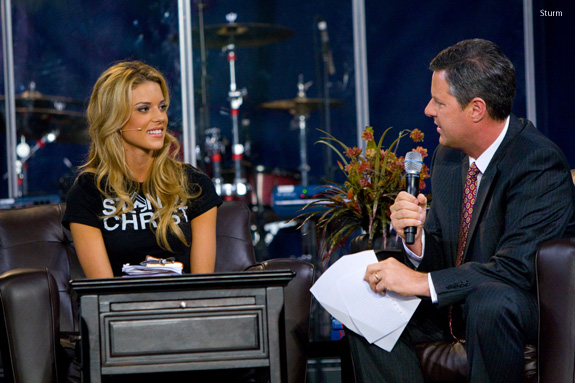 Carrie Prejean, the reigning Miss California, made a special appearance at Liberty University’s Wednesday convocation in a sit-down interview with Chancellor Jerry Falwell, Jr., who asked her about the bold choice she made to stand up for her faith at the recent Miss USA Pageant.

After making it to the top five in the pageant, Prejean was asked a question from guest judge Perez Hilton, a homosexual activist blogger, about her beliefs on the topic of legalizing same-sex marriage in each state.

Prejean responded with the statement, “I think that in my country, in my family, I think that I believe that a marriage should be between a man and a woman. No offense to anybody out there, but that’s how I was raised.”

Prejean finished runner-up in the pageant.

At Liberty, Falwell asked Prejean, a student at San Diego Christian College, how she felt on stage that night.

“As I was standing on that stage I felt so alone, I felt like I was up against the world. I saw Donald Trump sitting there in the front row, my family, my friends were nearby — millions of people were watching it on national television. I was so nervous …” Prejean said. “They instructed the question to Perez Hilton and he then asked the question, and from there I just knew that I was either going to please man or please God.”

Falwell praised Prejean for standing up for her beliefs.

“To me, it’s scary that we’ve come to a point in this country where somebody like you is castigated for supporting the institution of marriage between a man and a woman — something that most Americans support — and it just shows all of us what our challenge is in this next generation to turn this country around. We deeply appreciate what you did and for standing up for what you believe,” Falwell said.

Following convocation, Prejean was scheduled to join Mat Staver, dean of Liberty University School of Law, and Matt Barber on their one-hour nationally syndicated radio program, Liberty Live, that will air from 4-5 p.m. on American Family Radio and broadcast with video online at www.afr.net.