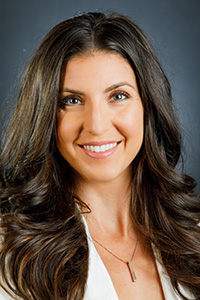 Professor Adelaide Trombetta is an internationally recognized singer and educator.  She was a triple major of voice performance, dance, and Spanish during her undergraduate studies, and is a graduate of Yale’s prestigious Opera Theater Program, having completed both the Master of Music program as well as the Artist Diploma program.

Professor Trombetta has enjoyed leading stage credits in Opera, Musical Theater, and concert repertoire throughout the US, Italy, and Switzerland. The New York Times called her “sensitive and affecting” during her performance on the Met stage as a National Finalist of the renowned Metropolitan Opera National Council Auditions. During her time there, she performed alongside Thomas Hampson, Samuel Ramey, Hei-kyung Hong, and Deborah Voigt. She continues to gain recognition in performances and competitions both locally and abroad having been featured on ABC’s Good Morning America, Classical Singer Magazine, and Opera News. She recently made her Carnegie Hall debut on April 10, 2017, and continues to expand her performance repertoire and experience.

Professor Trombetta has won numerous awards, honors, and competitions, leading to televised performances and numerous orchestral collaborations. Her career has also branched into unique performing opportunities including choreographing and performing her own tap routines, gospel, pop, and show tunes with symphony orchestras. Additionally, she has performed in designer gowns as the opening event for the largest Fashion Show in Italy.

Professor Trombetta serves as Director of the Opera Workshop and Assistant Professor of Music and Voice.