Huckabee calls believers to take a stand for life, liberty 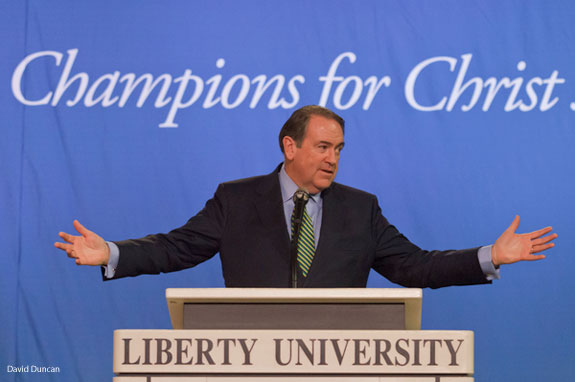 Former Arkansas Gov. Mike Huckabee channeled the energy of the Convocation crowd in Liberty University’s Vines Center Monday, issuing a rallying cry to young evangelicals to plant their feet and take a stand for individual rights.

“I hope you understand that there has never been a time in our nation and in our world where we need people who recognize their responsibility, not simply to get an education so they can make more money or become somebody, but that the education is their preparation to change a very troubled world. And if you don’t do it, it’s not going to get done,” he began.

Huckabee hosts a No. 1-rated weekend television program on Fox News Channel and a rapidly growing syndicated radio show. Before beginning his political career, Huckabee served as a pastor for 12 years and became the youngest-ever president of the Arkansas Southern Baptist Convention. He served as the governor of Arkansas from 1996-2007, where he was nationally recognized for his leadership. Time Magazine hailed him as one of the five best governors in America. In 2008, Huckabee finished second to John McCain in the race for the GOP bid for presidency. His popularity in the race soared shortly after his November 2007 visit to Liberty, in which he received a personal endorsement from Chancellor Jerry Falwell, Jr.

Huckabee last visited Liberty in 2009 when he spoke in Convocation.

“It has been my honor and privilege to become a friend of Mike Huckabee’s over the last few years,” Falwell said as he cited Huckabee’s numerous achievements.

Huckabee has authored nine books and is an avid musician, having performed at some of the largest venues in the country and at large political rallies, including a presidential inaugural ball and the Republican National Convention. 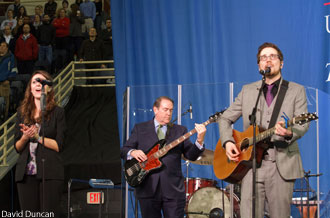 Students got a taste of Huckabee’s musical talents on Monday, as he plugged in his bass guitar and joined Liberty’s Campus Praise Band in a special performance of “Victory in Jesus.”

After his message on Monday, Huckabee aired a live broadcast of his radio show from the Williams Stadium tower.

One such musician was alumnus Robbie Hiner ('74), a favorite of Huckabee’s, who was a special musical guest on Monday. He began by singing “I Want That Mountain,” the song that became the hallmark chorus of Falwell, Sr.’s vision. While on stage, Hiner reminisced about the vision for Liberty to grow into a world-class institution with top-notch facilities. He expressed his excitement at seeing that vision come to fruition.

Hiner was well-received by the student body, who stood clapping and singing along to his melodies.

Huckabee then addressed the crowd, not mincing words, but criticizing the direction society is headed and calling for believers to recognize their moral responsibility. He said it is easy to say “yes”, and often more enjoyable, but Christians also need to know when to be tough and say “no”. He reminded the audience of Biblical heroes Daniel, David, and Jeremiah, who were committed to going against the norm and didn’t settle for what was easy because they knew God was calling them to fight for what was right.

“Throughout history, God’s kingdom and its greatness always depended upon people saying ‘no’ to things that might sometimes even seem pretty harmless,” Huckabee said. “The reason in many ways that America and our world is in trouble is not because the ungodly people have said ‘yes’ to ungodly things, it is that godly people have failed to say ‘no’ to the ungodly things.”

He said taking a stand like this is not an easy path and challenged those willing to endure the criticism and adversity to be intellectually prepared to defend their beliefs. He shared his passion to defend the rights of all individuals and the life of every person, including the unborn.

“All men are created equal … and they are endowed by their creator with certain unalienable rights, among these, life, liberty, and the pursuit of happiness,” Huckabee said, quoting America’s founding fathers. “One person is not better than another, one person is not less than another. That is a powerful recognition of the intrinsic worth and value of every human being.”

That, he said, is the essence of faith and freedom, and without it America would not exist. This country was built on the backs of men who strongly believed in this truth, that every person is uniquely created by God, holds value, and has the right to freedom.

Today that freedom is in jeopardy, Huckabee warned. He explained how companies like Chick-fil-A and Hobby Lobby are under fire because their owners stand up for their beliefs, even though they are not popular.

“The day that we say ‘yes’ to a government that limits the dictates of our conscience, that puts a parameter on the realm of our faith, and tells us that we can believe up to a point but not over the line of what the government deems is acceptable, we have not just lost our country, we have lost our basic fundamental freedom,” Huckabee declared. “You must come to the place in your life where you are not just going to say ‘yes’ to a government that tells you that it will limit you to what you can believe and how you can believe.”

Huckabee shared his appreciation for Liberty’s commitment to upholding truth and defending values and recognized Liberty University School of Law for fighting for these liberties.

“When I come to this campus, I am blown away — the largest Christian university in the world, with the most effective student body leaving from this place and going out to change the world in every discipline imaginable,” Huckabee said. “It is very true that the sun never sets on the graduates of Liberty University across the world.”

A number of special guests were also in attendance at Monday’s Convocation, including Hollywood legend Erik Estrada, Bedford County Sherriff Mike Brown, and singer/actress Stephanie Bettcher, a Liberty senior. Chancellor Falwell recognized them for their work in the recent film “Finding Faith.” The movie is saturated in Liberty talent and warns families of the dangers of Internet predators through a dramatic story based on Brown’s experiences heading the nation’s earliest (and most successful to date) Internet Crimes Against Children task forces.