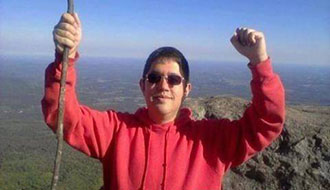 With its distinct Christian environment, Liberty University is known for surrounding its students with faculty and staff who are prime examples of Christ-like servanthood.

The Liberty family mourned the loss of one of those individuals last month when a facilities manager with Liberty University’s Field Operations Division died a few days after being resuscitated in a drowning incident.

Richard K. Duffy, Jr., 39, died in the hospital June 1 after he had been resuscitated at the Jamerson Family YMCA pool on May 29. According to news reports, he was swimming laps around 7 p.m. when he lost consciousness. He had no pulse or heartbeat when he was pulled from the water, but because of rapid response by lifeguards and rescue workers, Duffy was brought back to life and sent to the hospital.

"Richard truly was a man of God. He had a positive impact on everyone he had contact with," said Scott Starnes, vice president for Field Operations. "Richard was a humble, hardworking employee with an amazing personality and will be deeply missed."

Starnes said co-workers described Duffy as "diligent," "a joy to be around," "wise," "genuine," "giving," and "godly."

Duffy was pursuing his M.A. in music while working for Liberty. He played keyboard and served in other roles at various churches in the community. He was well respected as a facilities manager and enjoyed a sense of community with the students he served.

"He was such a faithful worker, friend, and servant of the Lord,” said Erick Hodge, a Spiritual Life Director for Dorm 7, which Duffy regularly cleaned. “As the semester went on I got to know Richard, his likes and dislikes, love for the Lord, people, and his family. He was always on time with a smile and a godly attitude as he served our hall. I never met anyone who cleaned the way he did. His life was an example of godliness that spoke louder than words ever could."

Hodge recalls how every morning Duffy would say “good morning” and ask how he was doing and “genuinely listen” as Hodge shared.

"Richard is a hero to me and to our hall," he said. "I have joy in knowing he is with our savior, Jesus Christ. Praise God for Richard and the life he faithfully lived for Jesus. He taught me many lessons — such as faithfulness to work, people, and Jesus — I will never forget through his tangible day-to-day example."

Hodge said the students living on his hall showed Duffy their appreciation in a tangible way at the end of the semester. Everyone pitched in to buy him Walmart and Chick-fil-A gift cards, a gesture that touched Duffy deeply.