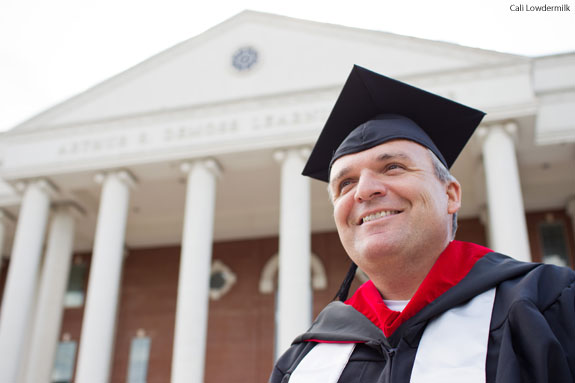 For some, graduation is the final step to a four-year journey that began post-high school and continued, uninterrupted, to its end. Others find their road to be much longer and more obstacle-ridden.

For Craig Daliessio, who will walk in Liberty University’s Commencement on Saturday, graduation holds an especially significant meaning as he faced great opposition, including three-and-a-half years of homelessness, en route to completing his degree 26 years after beginning as a residential student.

When the economy crashed in 2008, Daliessio, a then successful mortgage banker, soon found himself one of the many victims of company downsizing. At first, he admits that he thought it was just a phase that would quickly pass. Soon, however, the gravity of the situation sunk in as he found himself unable to afford any type of housing.

“It really hit me that this might go on for a while. In August of 2008, that is when I started sleeping in the car,” he said.

For the next year Daliessio learned the hard way how to make homelessness work so that he could continue to live in Nashville, Tenn., near his daughter whom he was now unable to take home for weekends. Determined to remain in her life, he endured homelessness rather than leave the area, and made sure to attend all of her recitals and visit her regularly after school.

He did not want her to worry about him, so he did not tell her he was homeless. In fact, he managed to keep this from most people he knew.

Daliessio would sleep in his car in discreet locations and shower at the local rec center. He performed odd jobs whenever he could — from building chicken coops to detailing cars — and would occasionally crash on a friend’s couch or scrape together enough cash for a temporary living arrangement during the coldest winter months. At one point, he rented a small office space and would sleep there at night on an air mattress and rise early in the morning before anyone could see him.

With nowhere to turn and no apparent hope of finding steady work, Daliessio said he was beyond his breaking point.

“I put out 207 resumes in the last three-and-a-half years and I got one call — if there was a hopelessness in a human form, it was me,” Daliessio said.

In the midst of the greatest trial of his life, Daliessio resurrected a long buried dream of his to complete his degree with Liberty University. Since he was a junior in high school in 1980, Daliessio wanted to attend Liberty. He finally made it to campus as a freshman in 1984 — four years after he graduated high school — as a pre-med major. He played on the school’s newly formed hockey team. After completing his first year, however, he was unable to return. A decade later, Daliessio returned to Liberty Mountain, played another season of hockey, but once again had to leave after only one year.

“Some of the things that you really long for kind of get buried but you never really forget them,” Daliessio said of his desire to graduate from Liberty. “It was a difficult journey but it was so important for me to get my education and to do it at Liberty, I really didn’t want to go anywhere else.”

In August 2009, Daliessio restarted his education with Liberty University Online. Thanks to the convenience of an online education and some financial aid, he was able to work on his degree in Religion, despite being homeless.

“For me it was just perfect,” he said. “I didn’t have to miss a beat, I could still keep doing my work. It just made it so much easier for me with a crazy schedule, with a lifestyle that at that point was so against being able to have a standard school day. It (Liberty Online) just really made it possible.”

Daliessio continued to work odd jobs locally and occasionally received construction jobs in his hometown of Philadelphia, Pa., through his cousin.

Since he was homeless, Daliessio would study wherever he could, careful not to attract too much attention. He studied and completed assignments in places with free Wi-Fi like the public library, restaurants and the FedEx Office. Occasionally he would study by flashlight in his car.

“There are things you take advantage of as a student,” Daliessio explained. “Being able to plop down in a chair at 10 at night and just read until you fall asleep or study all night if you have to — it’s not that easy if you don’t have a place to live.”

Daliessio knew a college degree would increase his skillset and help him to re-establish a career, but for him, in his current state, it was so much more than that. Not only did working on his degree give Daliessio a tangible way to monitor his success, it gave him a much-needed sense of accomplishment as one-by-one he completed his assignments and then his courses.

Last August Daliessio saw his first ray of hope during this season of his life. After performing a course audit, he realized he had completed 103 of his required 120 credit hours for graduation. He calculated he could graduate the following May if he continued his regular course load.

“I was certainly living without hope, it was the first time in at least five years that I was hopeful. From that moment on, I was as good as a graduate, my whole attitude changed.”

While Daliessio vigorously worked to complete his degree, his life finally began to turn around. In January 2012, for the first time in over three years, Daliessio was getting enough steady work to afford a place to live. Since then he has lined up a job, post-grad, with an insurance company.

With his newfound sense of accomplishment, Daliessio is determined to use his story to encourage others. He rediscovered his passion for writing, completing four books while he was homeless. His Christmas book, “A Ragamuffin Christmas,” will be published by Liberty University Press this fall.

“I just want people to see that in your darkest minute, God is there; He’s got a plan, he is not giving up on you. I lost my patience with the Almighty many times but He never lost His with me,” Daliessio said.

Daliessio vows he will never find himself homeless again, but said he is thankful for the experience and would not take it back. Though it was not how he pictured completing his dream of graduating from Liberty, it was all in God’s timing.

“It is a shame on the one hand that it took this long, but I am so thankful that I went through what I went through to discover what I was put here to do. I was making six figures in the mortgage business and hating every second of it,” Daliessio explained, fighting back tears. “Everybody has something that they gave up on, that they failed to try. Oliver Wendell Holmes said the real tragedy is that so many of us go to the grave with our music still inside of us. At 48, for the first time in my whole life I think my music is just starting to come out.”

On Saturday, Daliessio will participate in Liberty’s Commencement ceremonies, and after nearly 30 years of dreaming, fulfill his goal and receive his diploma.

“I’m going to walk across that stage like I’ve been dreaming of since I was a junior in high school and get that degree; and I will be able to point to something and be able to say I did this in the teeth of tremendous calamity and against all odds.”

Daliessio plans to continue his education with Liberty and earn a master’s degree.