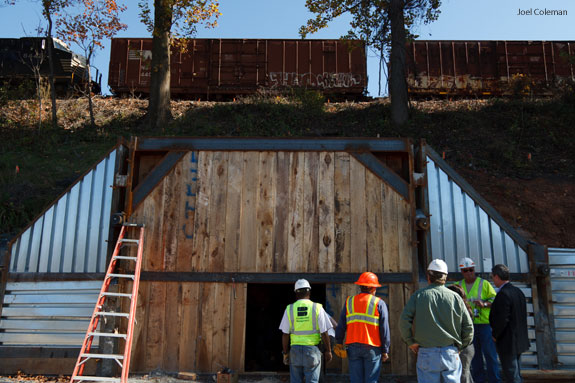 The tunnel is part of a project that should greatly enhance pedestrian safety along Wards Road, one of the busiest roadways in the city.

Liberty and the City of Lynchburg jointly financed a new pedestrian bridge, which will allow students to walk over Wards Road rather than crossing at road level. The bridge opened earlier this week.

Falwell and his wife, Becki, entered on Liberty’s side behind the Vines Center and walked the full length of the tunnel before Falwell kicked out some boards that protected the Wards Road side during construction.

The tunnel will undergo extensive concrete work before it is ready for student pedestrians in early January. It was built under existing railroad tracks and exits near The Vitamin Shoppe and Panera Bread on Wards Road.

“It will be much safer for students. It’s a big improvement,” Falwell said. “We’re going to put a fence along the tracks so they have to use the tunnel. It was an accident waiting to happen.”

The tunnel is nearly 200 feet long and about 12 feet in diameter.

Workers started on the project last month. It was dug with a metal encasement pipe, referred to as a “shield,” that was pushed through to remove the dirt, as much as 5 to 50 feet a day.

When it is complete, the tunnel will be a 7-foot-wide walkway with handrails and curbs, similar to the tunnel under U.S. 460 on Liberty’s East Campus.