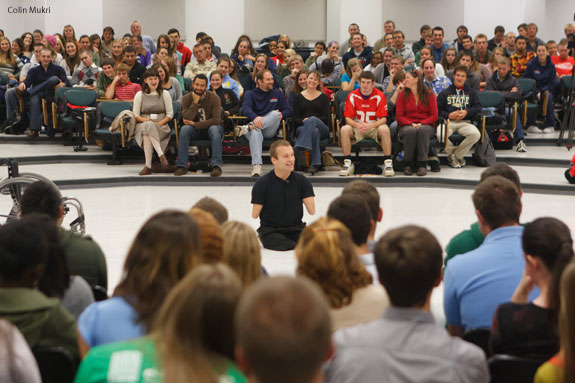 Athlete, author and young entrepreneur Kyle Maynard delivered a powerful message to Liberty University students on Friday to make “no excuses” for their difficulties in life.

Maynard, 25, was born with congenital amputation that left him with arms ending at his elbows and legs that end at his knees.

“There are no worthy excuses,” Maynard said. “Scripture tells us that all things are possible through Christ who strengthens us.”

At 11 years old, Maynard began wrestling at his school. After much determination, despite initial failure, he excelled in the sport, winning 36 varsity matches his senior year of high school. He now holds national titles in weightlifting competitions and has been given numerous national awards for his achievements. When he began his weight training, he could only lift 2½-pound weights; in 2009 he bench-pressed 420 pounds.

Maynard said his parents raised him to live a normal life, and he has gone through life with few adaptations. He can type up to 50 words per minute, write, eat, drive a car, and use an iPhone without assistance.

At 18 years old, Maynard wrote his book, “No Excuses,” as a freshman in college and it became a New York Times bestseller. He has appeared on The Oprah Winfrey Show, Larry King Live, ABC 20/20, Good Morning America and The CBS Early Show and many other national networks.

Maynard began traveling all over the country to share his story, but he encountered criticism along the way and had started to let it discourage him. He said he had never quit anything before, but admitted he had become a “depressed motivational speaker” and was ready to go back home, to the comfort of his family, instead of continuing in his speaking engagements.

It was at this pivotal point in his life when he was at an airport and met injured soldiers who told him they had contemplated suicide but had seen his story on television and were inspired to continue living. Maynard was in turn encouraged by their story and decided to practice what he preached and make “no excuses.”

“The challenges you have can be the greatest gift you have been given,” he said.

Junior Evan Camilleri said Maynard’s story “inspired me to strive for excellence in everything that I do.”

Maynard currently owns and operates a fitness center, No Excuses Cross Fit, in Georgia and speaks at up to 80 events throughout the country each year.

After his talk, Liberty’s Sigma Beta Delta chapter donated $2,000 in Maynard’s name to No Barriers, a non-profit organization that is partnering with Maynard in his quest to climb Mount Kilimanjaro next year.

Maynard said he enjoyed his stay at Liberty. He also expressed interest in Liberty University Online to continue his education.

“I am blown away by the faculty, staff and students here at Liberty. The people here are amazing. To see the growth of the university is incredible,” he said.

Friday’s event was hosted by the School of Business.