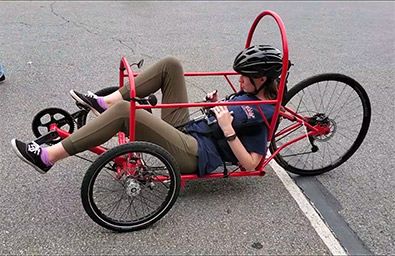 For the second consecutive year, the Liberty University Human Powered Vehicle Challenge (HPVC) team has placed in the top five of the national competition featuring 36 teams from collegiate programs around the U.S. The Liberty team was less than two points from placing in the awards bracket of the top three teams.

School of Engineering Professor Carolyn Ziebart is the faculty advisor for the team and has worked with the students over the last three years. She said that because most schools shut down early in the spring due to COVID-19, this year’s competition was different than those in years past.

“At first the American Society of Mechanical Engineers (ASME), the body that governs and judges the competition, just canceled the whole event,” Ziebart said. “But the competition is often used as student senior design project, so ASME decided that they would conduct a type of virtual competition. They made the best of a bad situation to make it as fair as it could be.”

Normally, teams are judged on two elements, a written report and an actual race, but the HPVC race scheduled for April 3-5 at Michigan State University was canceled because of COVID-19. The report, which normally accounts for 50% of the competition, was the sole element weighed in this year’s competition. 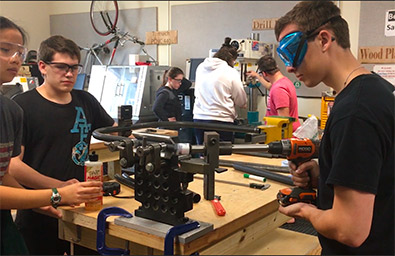 ASME judged each team’s report based upon criteria like design, analysis, testing, safety, and aesthetics. Ziebart said Liberty’s team did exceptionally well compiling the information for the report, especially given the circumstances.

“Some sections of the report were not complete when the shutdown happened, so we were planning on coming back from Spring Break and finishing it up, but we never got that opportunity.”

Each team was also required to submit a video in lieu of the presentation normally given at the physical competition. Ziebart said producing the video was the result of the students collaborating online since many of them had already gone home before the video was due.

“Last year we had a great performing vehicle, but our report was not as strong as we wanted it to be. So, since we did so well on the report this year, hopefully next year we will combine that experience with a strong vehicle and break into the top three,” she said.

Ziebart’s husband, Herb, is a mechanical engineer with a wealth of design experience, so he volunteers his time to work with the team’s 24 students and help them gain skills in design and manufacturing. This year’s team was led by students Tristan Polk, Virginia Corsini and Ryan Peters, and team coach Wesley Falwell, a former student at Liberty and the son of Liberty President Jerry Falwell, who helped with the welding and manufacturing of the vehicle as he did last year. 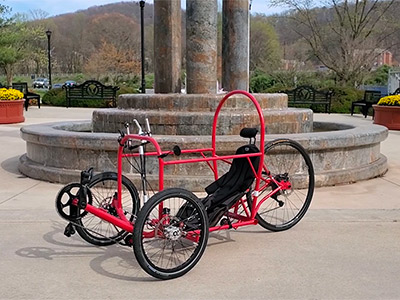 “I am so proud of the spirit of excellence that Professor Ziebart and Coach Wesley Falwell demand from the team,” said Mark Horstemeyer, Engineering School dean. “They and the students really want to win. I think they will have a great shot at winning next year.”

The HPVC is rooted in the idea that human powered vehicles are the most common form of transportation in many parts of the world, so the competition challenges teams to use practical and sustainable engineering principles to design, fabricate, and operate a vehicle that could be used to commute to work or even transport goods.

Liberty’s HPV, the Aero, is made of lightweight metal tubing and is capable of speeds up to 40 miles per hour with a turning radius of less than 3 meters. Essentially a three-wheeled recumbent cycle, it operates through a system of pedals and a chain, has turning signals and break lights, and, if it were able to have been driven in a competition, it would have included an air foil to minimize wind resistance.

According to Ziebart, next year’s team looks to be very competitive and is already working on the design for a new vehicle. Although winning is always the target, their goal, as Champions for Christ, is to show that Christians can be excellent designers, engineers, competitors.

“Some think that as Christians we have our heads in the sand, that we are not scientists or engineers and that we don’t know what we are doing. We want to show them that is not true. After all, God was the first engineer.”