Journey FM named finalist for 2020 Station of the Year

For the second time in its short five-year history, WRVL/The Journey FM has been named a finalist for the 2020 mid-market Station of the Year by Christian Music Broadcasters (CMB). The Liberty University-owned radio station was a runner-up for the 2017 award. 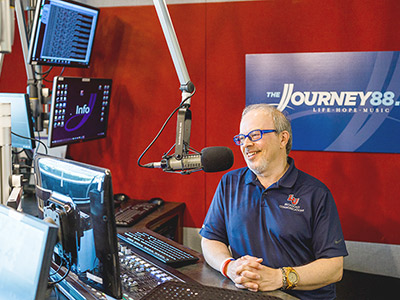 General Manager Mike Weston said the recognition by CMB is special because it is a peer nomination and shows that The Journey has gained the attention of radio industry professionals throughout the nation.

“I think it is wonderful for a station format that is only five years old because CMB is looking at a broad spectrum of factors,” said Weston. “That we’ve been nominated again in the short amount of time we’ve existed as The Journey shows that we have created quite a bit of notice and buzz.”

CMB recognizes stations not only for their listener ratings, but also for a number of business-related activities such as programming, sales, promotions, marketing materials, social media, and air talent.

Weston said this year’s CMB awards ceremony will be different than in past years because, rather than hundreds of industry professionals gathering in Orlando to attend the annual Momentum conference and awards banquet, the event will be held virtually in late May.

“I have a really good feeling about our chances this year,” Weston said, noting that even though the other two stations in the category are much more established and have been around longer, The Journey is bringing a fresh perspective to Christian radio with creative programming.

During the COVID-19 crisis, Weston said the station is partnering with local sponsors to fund The Journey COVID-19 Heroes campaign, an effort to help others in the time of social distancing and isolation.

Listeners can nominate first responders, medical workers, or other essential workers who serve the community by submitting a picture through the station’s Facebook page. Each week, three “heroes” will be randomly selected to receive a gift card to a local restaurant.

“We want to honor folks who are working for all of us on the front lines,” Weston said. “It’s our idea of finding a way to help and to give back to those who are serving their local communities.”

The original radio network was formed in 1981 as Victory FM and featured the radio ministry programs of Liberty founder Dr. Jerry Falwell. Over the years, the station has transitioned from a format that included talk radio, Bible teaching, and Christian music to its current contemporary Christian music format. The Journey also broadcasts Flames football and Liberty news and events. It usually employs at least one Liberty student worker or intern. 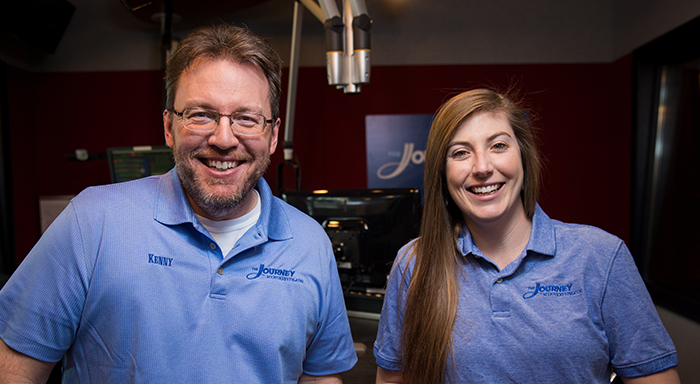 Weston said that although the station’s format may have changed over the years, the mission has remained the same, and the name “The Journey” was chosen with a specific vision in mind.

“We want to be accessible to as many listeners as possible. Whether you grew up in church, or are unsure about Christianity, or if you are an agnostic who happens to land on our station, we want to have a welcoming feeling,” he said. “Through everything we do, we try to share hope because, especially now, people need that.”

WRVL/The Journey FM can be heard on 88.3 in Lynchburg, and on 11 additional stations in Virginia and five in North Carolina. Listen live at myjourneyfm.com.