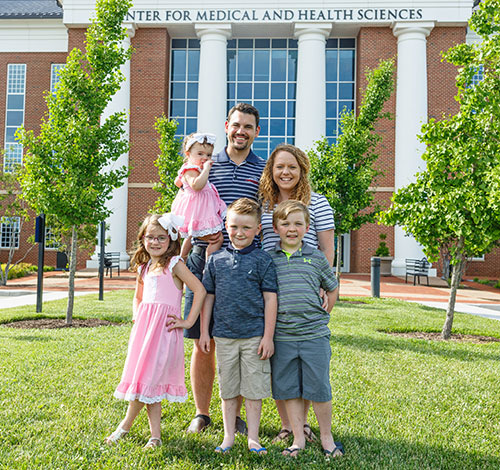 Getting accepted into medical school and studying to be a physician is difficult enough, not to mention the challenging endeavor of parenting. For Marvin Cuevas, a member of the Class of 2019 at Liberty University College of Osteopathic Medicine (LUCOM), those major life events intersected in an unexpected way.

Cuevas and his wife, Deborah, had been fostering a 2-year-old boy, Rhys, in Arkansas when Cuevas was accepted to Liberty. Fostering was very important to the couple, so Cuevas came to Lynchburg in Fall 2014 to start medical school while his wife continued to care for the child in Arkansas.

“LUCOM was always my first choice,” he explained. “Once I received my acceptance letter, I cancelled all of my other interviews because I knew this was where I wanted to be. I chose LUCOM because of the culture of excellence that is so prevalent among the faculty and staff, as well as the commitment to biblical principles that are so important in my personal life.”

During Christmas break his first year, Cuevas learned that Rhys was ready to be adopted, along with his younger twin siblings, Khye and Laikyn, who were living about two hours away.

“Adoption has always been an important part of my life, as I was adopted at the age of 13 by my aunt and uncle,” Cuevas said. “So, my wife and I always knew that we wanted to adopt, specifically through the foster care system.”

In order to adopt the three children, Cuevas knew he had to leave medical school temporarily.

“For me, the decision to take a semester off was not a hard decision at all,” he said. “My responsibility to my family had to be the priority. As soon as we got the news, I contacted Dr. Timothy Leonard, (LUCOM senior associate dean) and Dr. Ronnie Martin, (LUCOM’s founding dean), and they graciously granted me the leave of absence. For me, this just confirmed that LUCOM was the place where I wanted to train to be a physician. The character of the faculty and staff is what makes LUCOM such an amazing place to learn and grow.”

The Cuevases jumped into raising three children under the age of 3.

“It was one of the most challenging but rewarding seasons of our lives,” he said.

He recalls what Dr. Martin told the Class of 2019 when they first started. “He told us that to succeed in medicine you have to have your priorities straight. For him, and me, this meant to put my faith first, my family second, and medicine third. I cannot tell you how true I have found this to be over the past four years both at school and in the hospital.”

Cuevas returned to school in Fall 2015 and worked through his studies and clinical rotations. Then, in September 2017, the couple celebrated the birth of their youngest daughter, Magnolia, just as Cuevas was starting his third year at Liberty.

“For me, it’s all about my perspective, knowing that my identity is not found solely in medicine,” Cuevas said. “Keeping the perspective that God is with me through every challenge really allowed me to rest in the knowledge that I don’t control every aspect of my life. It allowed me to focus on the things that I could do and trust that God is capable of handling those things that are too big for me.”

He also credits his wife with being his “lifesaver” throughout medical school.

Now, as a 2019 graduate and a father of four, Cuevas and his family are headed to Somerset, Ky., where he will work at Lake Cumberland Regional Medical Center for his internal medicine residency.