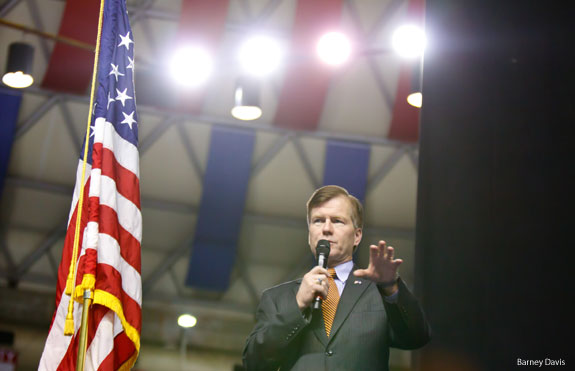 Virginia Gov. Bob McDonnell addressed more than 700 rising high school seniors, who he referred to as the “promising leaders of tomorrow,” at the annual American Legion Boys State at Liberty University on Tuesday.

Liberty has been hosting the mock government educational program for more than 10 years. Participants stay in dorms, eat at Reber-Thomas Dining Hall, and hold sessions in classrooms in Arthur S. DeMoss Hall. They also have use of the Schilling Center, the LaHaye Student Union and intramural fields for recreation.

Boys State is one of 31 camp programs and events being held on campus this summer. 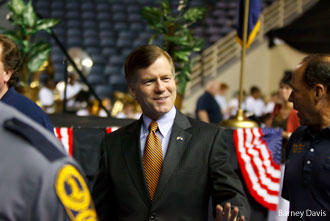 Participants say they value the experience because they plan to stay actively involved in our nation’s government. When McDonnell asked the crowd if any of them had been keeping up with recent debates concerning the debt ceiling, nearly every hand shot up.

“You do have incredible opportunities here in 2011 … to live the American dream. If you work hard, if you dream big, if you follow the golden rule and respect one another, if you pursue opportunity vigorously -- you can still be anything you want to be in the United States of America,” McDonnell said.

The governor encouraged students to consider careers in public service.

“Being able to serve your fellow human being, to do something good every day to help make the quality of life better for your 8 million fellow Virginians is an amazing calling,” he said.

He also spoke about his priorities as governor, which included creating more opportunities for higher education, improvements to the state’s transportation infrastructure and fiscal situation, environmental protection and job creation.

Before taking questions, he urged participants to make a difference in America’s government by staying involved in politics.

“Get involved. Vote. Do what you’re doing here. ... Find ways to do things differently. Run for office yourself – do something to make sure you’re participating in the political process,” he said.

This was McDonnell’s sixth year to speak at Boys State – he first spoke while serving as Virginia’s Attorney General, before he was elected governor in 2009.

Several other speakers are scheduled throughout the week, including Attorney General Ken Cuccinelli and Lt. Gov. Bill Bolling.