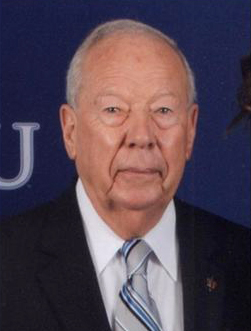 Liberty University is mourning the loss of one of its most faithful friends. Charles R. "Red" Stone of Virginia Beach, Va., passed away on Friday, June 15, at the age of 80.

Friends and family, including Liberty President Jerry Falwell and his wife, Becki, attended his funeral on Wednesday in his hometown of Amelia Court House, Va. Harold Knowles, a friend of Stone’s and a senior planned giving officer at Liberty, sang during the service.

Stone has impacted the lives of countless students at Liberty and has greatly contributed to the school’s growth over the years. In the last 10 years, he has made substantial contributions to the university to ensure that its mission of Training Champions for Christ will continue.

Stone’s obituary said that he was “an enthusiastic and loyal supporter of Liberty University in Lynchburg. He had a close personal relationship with the Falwells, and Liberty lost a great friend and supporter.”

President Falwell said he valued Stone’s friendship and loyal support. “We’ve talked regularly on the phone over the years,” Falwell said. “We’ve become good friends. We couldn’t be where we are today without his generosity and friendship. Red had a heart for seeing this university grow and took great pride in seeing our students enter careers with the skills and values they learned at Liberty.”

The obituary described Stone as “the epitome of the self-made man.” He first worked as a mechanic, then went on to own the gas station where he had worked. He owned a car dealership and many other local properties. He also bought and sold farms and timber tracts in surrounding counties.

In an interview with Liberty News Service in 2008, Stone said he was proud of the work Liberty was doing and wanted to be a part of educating Christian young people.

“Liberty does a great job, first of all, in helping children; that’s the main thing I want to do is to help a child go to a college with a spiritual background,” he said. “I love the university.”

Falwell said Liberty will be receiving a substantial portion of Stone’s estate. Falwell recalls visiting Stone along with his son, Trey, and Knowles a few years ago.

“He personally drove us to his numerous properties and showed us what he was giving Liberty. We were extremely honored to hear about this generous gift. We will miss Red, and we are grateful for the love and support he has shown us for so many years. He is leaving a legacy at Liberty, and his gifts are a true investment in the lives of our students.”