Many in the Liberty University community remember alumnus Chad Atchison (’13, ’16), who died Saturday at the age of 27, as a smart and outgoing person who was involved in a number of student clubs and extracurricular activities as a student. But Liberty University School of Law Professor Pam Bell said that there was another side, a more tender and caring spirit that not everyone got to see. 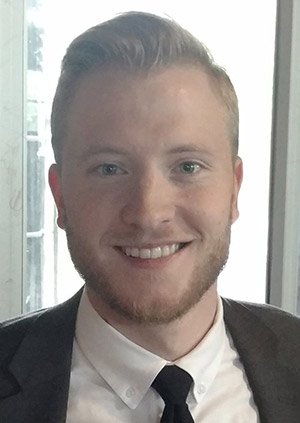 “He was just a real talent, fighting for the people and victims of crime in a very passionate way,” Bell said.

Atchison, who was working as assistant commonwealth’s attorney in Pittsylvania County, was killed in the early hours of Saturday morning after being struck by a vehicle while riding a skateboard in Danville, about an hour and a half south of Lynchburg.

A Maryland native, Atchison earned his juris doctorate from Liberty University School of Law in 2016. He graduated with distinction in 2013 from Liberty’s Helms School of Government, where he majored in Western legal traditions. He minored in history and criminal justice and also earned an Associate of Arts in Criminal Justice. Atchison was involved in the Student Government Association (SGA), serving as president his senior year. He was a member of the School of Law’s Trial Team.

Bell said she stayed in touch with Atchison after serving as his professor, Trial Team coach, and faculty mentor for the Bar Exam. She recalled seeing Atchison come into class with his head shaved one day during his first year of law school. She learned he did that in support of his grandmother who was battling cancer.

“He was very close to family, especially his grandmother,” Bell said.

Atchison would visit his grandmother as often as he could during his time at the School of Law, traveling to Maryland almost every weekend his final semester.

“I’m not sure everybody saw the Chad who would carry his grandmother upstairs every night and take the time (while) trying to study for the Bar Exam to just sit by her bed and talk with her,” Bell said.

Though his grandmother died shortly before he took the Bar, Atchison still passed the exam.

Bell said Atchison used his gifts to serve others in his career.

Many peers and former classmates of Atchison’s expressed similar sentiments, saying he was an active listener and worked hard to serve campus needs while in SGA.

Brittany Roark, who also graduated from Liberty Law with Atchison in 2016, said Atchison was admired by his peers for his knowledge of trial procedure and for his upbeat personality.

“Chad was an amazing person who always had a smile on his face,” said Roark, an assistant commonwealth’s attorney in Lynchburg. “Chad was very passionate about trial and had the answer to everything to do with trial. During law school, when we were taking Trial Advocacy, I remember if anyone had a question or a problem that arose the answer was: ‘Go ask Chad, he will know.’ Chad created a special bond with each individual he met. He will be missed by everyone.”

Liberty President Jerry Falwell, who was traveling when he heard the news, expressed sorrow on behalf of the Liberty community via Twitter:

A memorial service will be held in Danville on Wednesday from 6-8 p.m. at Norris Funeral Services, Mount Hermon Chapel (3995 Franklin Turnpike). A funeral service is planned for 11 a.m. Saturday at the Evangelical Presbyterian Church in Annapolis, Md. (710 Ridley Ave.).

Online condolences may be made at LastingTributesFuneralCare.com.