On Saturday, 126 student-doctors made history as they became Liberty University’s first class of osteopathic physicians.

For the graduates of Liberty University College of Osteopathic Medicine (LUCOM), it was a day four years in the making. For Liberty, it was a longtime vision that became reality.

In 2012, a groundbreaking ceremony marked the first steps in building the Center for Medical and Health Sciences. Thanks to a $20.5 million grant from the Virginia Tobacco Indemnification and Community Revitalization Commission, the 144,000-square-foot, four-story facility was completed in 2014 to train medical professionals who would go on to serve underprivileged areas in southside Virginia.

“Class of 2018, you were chosen to attend LUCOM based on your character, capacity, and motivation, and it was truly a divine appointment that guided you to attend this medical school,” said Dr. Peter Bell, LUCOM dean, in his opening remarks at the college’s hooding ceremony. “I have seen you demonstrate your passion for medicine with a servant’s heart. ... I marvel at your accomplishments as student-doctors and soon-to-be colleagues in the high calling of osteopathic medicine.” 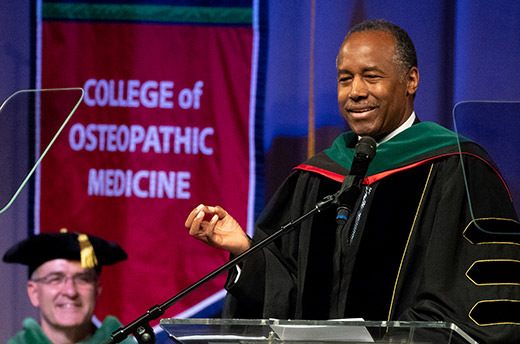 According to Bell, two-thirds of the class will begin primary care residencies. The rest will enter several different specialties, including internal medicine, pediatrics, emergency medicine, neurology, and obstetrics and gynecology. Many will work in hospitals in underserved areas and communities across the country, and some will enter the medical mission field.

Carson first visited the Center for Medical and Health Sciences in 2015, when he came to campus to speak in Convocation. He met with LUCOM students and toured the facility. He said he always feels welcome and “at home” when he comes to Liberty.

In his speech, Carson shared stories of lessons he has learned over his extensive career as a neurosurgeon.

“The road that you travel is not always going to be easy,” Carson said. “There will be bumps.” 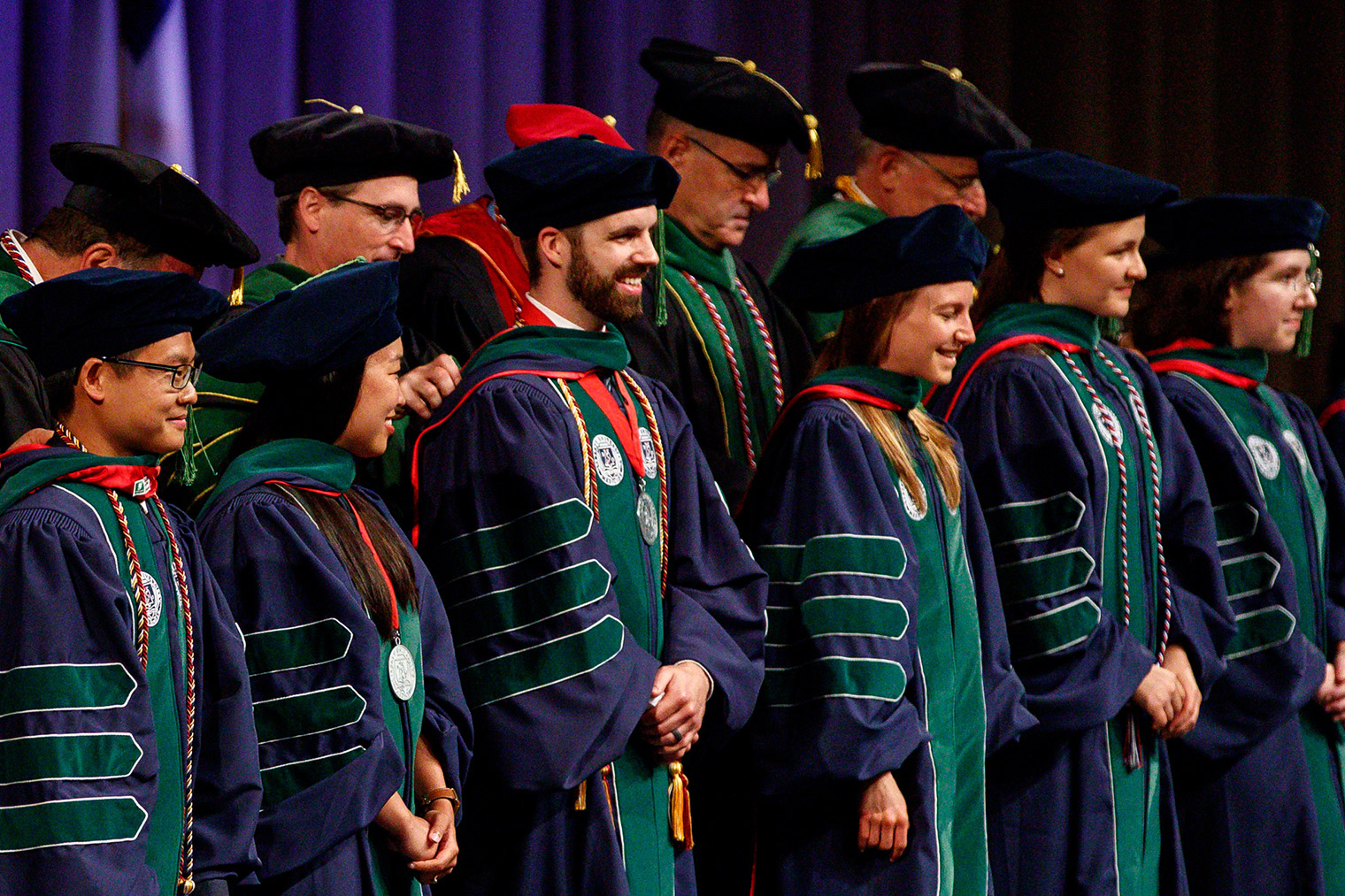 He said while in medical school at the University of Michigan, he failed his first series of comprehensive exams. His advisor quickly told him to forget medical school. But after working hard, Carson exceled. Years later, in an ironic twist, he was invited to be his alma mater’s Commencement speaker.

He said that unlike that advisor, people should take a closer look at the real issues and not dismiss them right away without getting to the heart of the problem. He said this translates to the field of medicine and encouraged the graduates to become “holistic healers.”

“Be a person who looks at the entirety of the individual — the soul, the brain, the body,” Carson said. “Treat people the way you would want to be treated, not as ‘the colon cancer (patient)’ or ‘the emphysema’ or some other disease. I’ve heard so many people in the medical profession refer to the patient as a disease. They’re not a disease. They’re created by God, for whom Jesus died, and for whom we have the privilege of intervening to change their lives.”

Being able to hear Carson speak at their hooding ceremony was an honor, said LUCOM graduate Craig Mitcham.

“It speaks volumes for the influence Liberty has,” he said. “He’s a person of great character. (Carson) has accomplished so much in his personal life, whether it’s his medical accomplishments or how he was able to overcome adversity in his life.”

During the ceremony, Falwell congratulated the inaugural class on the way they have already shown God’s love to others.

“Part of LUCOM’s mission is preparing students to have a servant’s heart and to be competent and passionate in the workforce,” he said. “We have accomplished that. I hear reports from physicians all over the community on how delighted they were to have worked with you, how your compassion for others is evident in what you do.”

He told them that their extra efforts beyond their classes were obvious.

“Whether it was conducting a community clinic just down the road in Danville, or tending to medical needs in Guatemala, Honduras, Peru, or the Dominican Republic, you stayed on mission as true public servants.”

LUCOM’s founding dean, Dr. Ronnie Martin, thanked the students for “establishing a legacy” for those students and classes that will follow, “creating a culture for the college that will light the pathway for others.”

“You are all pioneers, explorers, and leaders for many reasons, not merely because you are the first class,” he said.

Graduate Josh Steele said it’s an “unreal feeling” to be part of the first class. He will be completing his residency in internal medicine with St. Joseph Health System in Michigan.

“I would have never thought I would end up here when I first came to Liberty nine years ago (for his undergraduate degree),” he said. “I think being part of this first class has given us all a unique, diverse bond that the rest of the classes won’t have.”

For Josh Brunton, the relationships he built while at LUCOM will span the rest of his life, he said. He met his wife, Nicole, also a LUCOM graduate, while they were at Liberty.

“That’s the biggest takeaway,” he said. “Our professors got to know us on not only a professional level, but a personal one. I feel like no matter where I go from here, whether I need someone to help me move or call for career advice, I can rely on the people I met here.”