Repentance, redemption, and restoration are overriding themes of this semester’s Convocation schedule at Liberty University, and Monday morning was a prime example as former Virginia Tech and NFL quarterback Michael Vick discussed his transformation. Since serving prison time from 2007-09 in Leavenworth, Kansas, after pleading guilty to federal conspiracy charges for his role in running a dogfighting operation, Vick said he has returned to his childhood faith.

“Your character is based on what you do when people are not watching, and I learned that the hard way,” Vick said.

Vick, who has worked as a FOX Sports analyst since September, is one of Virginia Tech’s most successful players of all time, leading the Hokies to an 11-1 season before becoming the No. 1 pick of the Atlanta Falcons in the 2001 NFL Draft. He signed a $130 million contract as a 23-year-old franchise quarterback for the Falcons, guiding them to the NFC playoffs in 2002 and 2004. He became the first NFL quarterback to rush for over 1,000 yards in one season in 2006. He was inducted into the Virginia Tech Athletics Hall of Fame on Sept. 22.

But Vick had become a much different person than he was as a child growing up in Newport News, Va., when he went to sleep with a Bible under his pillow.

Holding up his Bible, Vick said that as a child, “I felt like this was the gateway to get (to the NFL) even though I didn’t understand it. When I got drafted, and I got the $100 million contract, this didn’t come with me. I really felt like I did it on my own. I totally forgot about the prayers I had at night where I asked God to forgive me for all of my sins. From the time I got drafted to the time I went to prison, I never picked the Bible up again.”

“I lost sight of everything I wanted to become and found myself in a very dark place,” Vick continued. “My whole life was a lie. The best thing that happened to me was getting shipped off to Kansas, because other than that, I wasn’t going to change. When I got to prison, I found this (Bible) and I started to open it up again. It was a deep reevaluation process of my life.”

Vick read Psalm 23 to the crowd, a passage that he said he drew inspiration from every night of the 544 days he spent in prison.

Former Indianapolis Colts Super Bowl champion coach Tony Dungy visited Vick in prison in 2009 and challenged him to let go of his past and be set free in Christ. 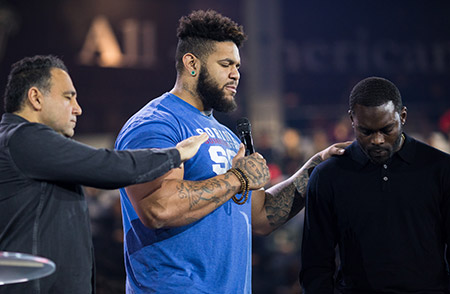 After being released from prison, Vick resumed his NFL career and later became an “unlikely advocate” for animal rights as a representative of the Humane Society of the United States.

“To face all your demons, put them in the past, and be forthright about it; it is the best thing you can do,” Vick said. “At the age of 21 or 22, I was very conflicted mentally about the ways to treat animals. I fell into a trap of fighting dogs and thinking it was cool. The irony about it is I’m an animal lover. My entire life, I took in stray dogs. My heart and passion is there for the animal world.”

Former Hokies offensive lineman Nick Acree, who now serves as a Liberty Senior Resident Shepherd for the Office of Spiritual Development and chaplain for the Flames’ Men’s Basketball team, closed the service by praying for Vick, that he would continue to walk by faith and be a shepherd to his family.