“Nathan’s Hope,” produced by LFSN Production Manager Jonah Jabbour and aired during the Oct. 14, 2016 episode of “Game On,” won the Emmy in the Religion — News Single Story/News Series category. It beat out finalists from major television network affiliates in the region. The winning feature focused on Nathan Norman, a local 10-year-old boy who is battling cancer.  Norman earned an honorary scholarship onto the Flames’ Football team.

It was the second year in a row that the program has earned an Emmy in that category; a feature on former St. Louis Rams and Baltimore Ravens football player Jason Brown received the award in 2016.

“It’s a big deal for our show to win this award and to do so in a region with some big-time markets — Baltimore and Washington, D.C.,” said Matt Warner, the “Game On” anchor who narrated the piece. “It was definitely a team effort, and it shows how far we’ve come as a show and the quality of work that we’re doing.” 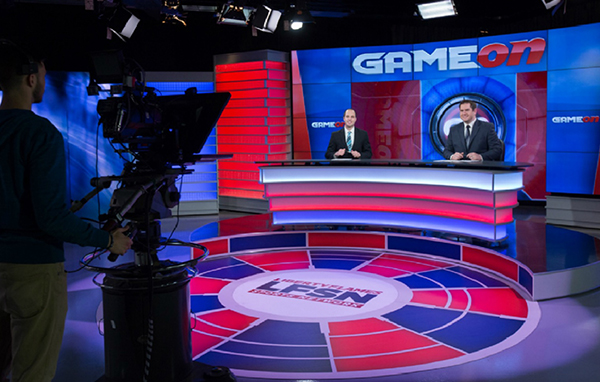 “It’s exciting for us to win the award, and we’re glad that it brings more recognition to Nathan’s story, his courage, and his strength,” Warner said. “It inspires people with the way the football team has come alongside Nathan, and it definitely shows that for Liberty and the football program, it’s more than just about wins and losses. It’s about encouraging someone who’s fighting a disease. In turn, he probably inspired the coaches and the players as much as they have supported him.”

The July 29, 2016, episode of “Game On,” also anchored by Warner, was also a finalist for an Emmy in the Sports — Daily or Weekly Program category, earning runner-up status in voting to the Ravens Report, a production of the Baltimore Ravens NFL team.

This summer, Warner, co-anchor Rett McGibbon, and the LFSN crew have traveled across the United States to produce features on current Liberty student-athletes as well as alumni pursuing professional dreams. “Game On” will also air segments from around campus focusing on Liberty’s Indoor Track Complex and Indoor Football Practice Facility as the Flames begin the transition to the Football Bowl Subdivision (FBS) this season.

“It’s a perfect time, with all of the focus around football, to start doing shows that highlight some of the people who helped build the program and those who are reaping the benefits now,” Warner said. “It’s an exciting time all around for ‘Game On.’ We’re growing, getting a lot of feedback from viewers, and gaining exposure.”