When Hope Larson walked across the stage to receive her diploma, she wore one graduation cap and carried another, in memory of her middle son, Ryan.

Larson enrolled at Liberty in 2013 to pursue a Bachelor of Science in Psychology with a concentration in Crisis Counseling. Ryan joined her in 2015, taking psychology classes with a focus on Addiction and Recovery. He had gained victory over drug addiction himself and had big plans to help others.

“Ryan had such a heart for kids in the Myrtle Beach area who are dying from heroin overdoses and felt so called to reach them,” Hope said. “We had talked about opening a treatment center that ministered to addicts and their families.” 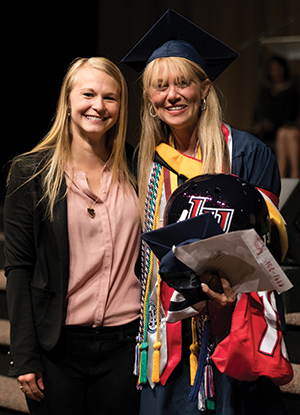 Ryan had only taken a couple of courses when he died unexpectedly at age 24 from a diabetic condition (he was diagnosed with Type 1 diabetes at age 20). Hope leaned on her faith — and timely counsel and prayer support from Liberty student advocate Leah Trent (’12) — to complete her degree.

“Leah’s amazing,” Larson said. “She was my advisor and my God-sent rock. I would not have graduated without God and Leah. She played a very significant role, sending me cards when I needed to be encouraged and praying for me every day. She went above and beyond, and I will never forget her for the rest of my life.”

Trent, who presented a Liberty football jersey and helmet with Ryan’s favorite No. 13 to Larson during her degree presentation ceremony, said her role quickly turned from advocate to friend.

“I remember us both crying and discussing her next course of action,” Trent said. “I encouraged her not to give up on her educational goals, as I knew they were important to her. I do believe that she can have a huge impact on many lives, and I know that she will be able to glorify God in anything that she does.” 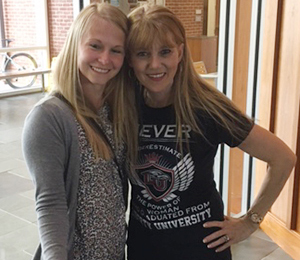 Hope Larson has since endured many more trials. Soon after Ryan’s death, she lost her best friend to a rare form of cancer. She followed God’s lead to close the family’s photography studio in Myrtle Beach, S.C., and move to Maryland to become her parents’ primary caregiver; her mother was diagnosed with mid- to late-stage dementia three days before her father was diagnosed with Alzheimer’s disease.

“My inspiration definitely exploded with Ryan’s inspiration, goals, and dreams,” she said.

Hope is part of the close to 6,000 graduates with military ties in the Class of 2017. Her husband, retired U.S. Army Lt. Col. Bob Larson, now works as a civilian at the U.S. Air Force headquarters in Washington, D.C.

“She showed an amazing amount of commitment and dedication to completing her degree,” Bob Larson said. “The sky’s the limit for her. What I know from watching her go through this experience is there’s nothing she can’t do if she sets her heart and her mind to it.”