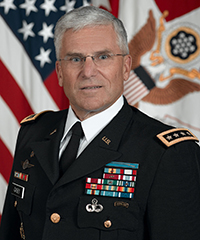 U.S. Army Gen. George Casey, who served as the Army’s Chief of Staff from 2007-11, will be the keynote speaker for Liberty University’s Army ROTC Commissioning Ceremony on Friday, May 12.

Graduates will accept the rank of second lieutenant at the ceremony, set for 9 a.m. in the Towns-Alumni Lecture Hall.

Casey is one of only 230 U.S. generals to reach four-star status and was designated the first senior commander of a Multi-National Force in Iraq in 2003, serving in that role from 2004-07. He was in charge of a coalition of 1.1 million military personnel from over 30 countries and an annual budget of over $200 billion.

Christopher Rhoades, a senior military science instructor at Liberty, called it a “tremendous opportunity” to have Casey speak at Liberty.

“He is one of the highest-ranking officers to ever come to Liberty,” he said. “He is largely coming to inspire the cadets and to give them a better understanding of the Army he left and the one they are going into.”

The retired general was invited by Liberty senior Ben Solem, one of 10 Army ROTC cadets to be commissioned. Solem is one of three distinguished military graduates in this year’s class, along with Rob Moretz and John Hixson.

Solem first met Casey in Washington, D.C., in 2014, when Solem was invited to speak at the ThanksUSA Treasure Our Troops Gala, where winners of the Jackson Casey Scholarship are announced. The scholarship, given to military dependents, is named in honor of Casey’s grandson who died in 2011 at age 11. Solem received the scholarship in 2012 and 2015. He met Casey again last summer when he was the gala’s scholarship awardee speaker. (Solem’s younger brother, Joseph, and older sister, Hannah ('15, '16), also received the merit-based grant in 2014.

“We are very, very privileged to have him come down to speak at Liberty,” said Solem, an interdisciplinary studies major concentrating in government and biomedical science. Solem is the son of Army Lt. Col. Greg Solem, now stationed in Ellensburg, Wash. 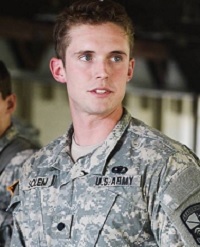 Solem, Moretz, and Hixson earned distinguished military graduate status based on their grade-point average at Liberty, proven leadership in their ROTC unit, extracurricular activities, physical fitness test scores, and public relations and speaking engagements. As a branch infantry graduate, Solem will be assigned to Fort Benning, Ga., on May 26. His future plans include pursuing a master’s degree in medicine or law.

Liberty will hold its Military Spouse Graduate Recognition Ceremony at 10 a.m. on Friday, May 12, in the Center for Music and the Worship Arts' Concert Hall. Also on Friday, the Air Force ROTC will hold its commissioning ceremony at 3 p.m. in the Science Hall auditorium. That night, all military graduates (service members, veterans, and their families) as well as military faculty and staff members are invited to the Military Graduate Recognition Ceremony, scheduled for 7:30 p.m. in the Vines Center. Retired U.S. Air Force Chaplain, Col. Steven E. Keith, D.Min., director of Liberty’s Center for Chaplaincy, will be the featured speaker. All graduating service members and veterans will be presented with a challenge coin, a cherished military tradition.