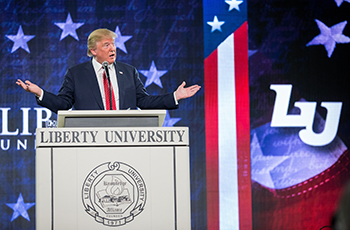 The university has previously hosted one other U.S. President while in office, George H. W. Bush, at Commencement on May 12, 1990.

President Falwell said, "It is a tremendous honor and privilege for any university to host a sitting U.S. President, and we are incredibly grateful to have President Trump be a part of this historic day.  Liberty has always been proud to provide its students with the opportunity to hear from successful professionals, including athletes, business leaders, ministers, entertainers, and politicians, regardless of their political or theological persuasion. This May, Liberty students will have the honor of hearing from a man who has succeeded in business and in politics, defying conventional wisdom to become the 45th President of the United States as a champion of the average American citizen, including many who felt forgotten and neglected by the establishment."

In an exclusive with CBN News, President Trump said, "I look forward to speaking to this amazing group of students on such a momentous occasion. Our children truly are the future and I look forward to celebrating the success of this graduating class as well as sharing lessons as they embark on their next chapter full of hope, faith, optimism, and a passion for life.”

Commencement always provides a very exciting weekend for the entire Lynchburg community. 18,000 graduates from across the nation will receive degrees (from both residential and online programs). Total attendance of graduates and guests has approached 40,000 in recent years, packing Williams Stadium, home stadium of the Liberty Flames football team, which was recently promoted by the NCAA to its Division I, Football Bowl Subdivision. Liberty will be bowl eligible beginning in 2019.