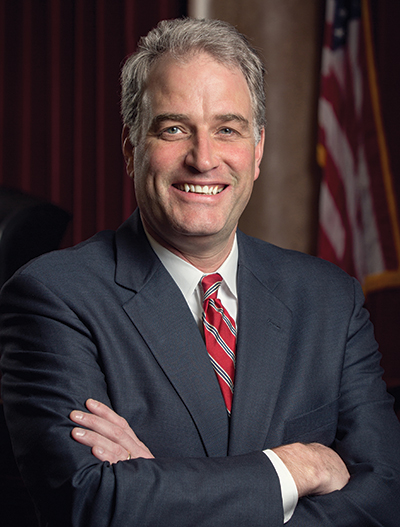 An editorial by former U.S. Congressman Robert Hurt, executive director of Liberty University's new Center for Law & Government, was published in Sunday's Richmond Times-Dispatch. The editorial (posted below) focused on the fundamentals of freedom in America and Liberty's rising profile and influence. Hurt spent 15 years in local, state, and national government. He represented Virginia's Fifth District in the U.S. House of Representatives from 2011 to 2017, and served in the Virginia Senate from 2008-11 and the Virginia House of Delegates from 2002-2008.

Read more about Hurt and how the new center will influence public policy and celebrate conservative ideals in America in the latest edition of the Liberty Journal magazine.

As a member of Congress for the past six years, I was reminded every day what a blessing it is to be an American — whether visiting wounded soldiers at Walter Reed hospital or visiting graves at Arlington Cemetery. Most often, I was reminded of this blessing every time I walked down the hall to our Capitol rotunda — the literal and figurative center of the grandest experiment in self-government that the world has ever known.

Standing on the stone floor of the cavernous hall that once served as a hospital for wounded and dying young Civil War soldiers, I considered the paintings and sculptures of those who embody our most enduring American ideals: General George Washington, Thomas Jefferson, Abraham Lincoln, General Dwight Eisenhower, and Martin Luther King.

Amid these giants, however, I found that the greatest reminder of this blessing was not in the canvas and marble, but in the faces of the thousands of children who daily visit the Capitol from every county and crossroads of every state in the union and from every country across the world.

To me the remarkable thing was not where they came from but why they had come. For all of the beauty of our Capitol, these visitors did not come for the building and its architecture but for what the building represents. They did not come for the canvas and marble but for an ideal — the ideal of American freedom. The same freedom that is our shining city on a hill — shining not just for our people but also for people around the world.

Throughout my time in Congress, I often wondered whether we are living up to our responsibility to ensure that the next generation understands the value of this freedom and is prepared to preserve it.

Thomas Jefferson believed that only a well-educated citizenry would be equipped to preserve our hard-won American freedoms. Sadly, today we see on many college campuses across the country an unmooring from the principles of our founding. Concepts of limited government and free enterprise are swept aside in favor of a progressive philosophy that puts more and more government bureaucrats at the center of our lives and our economy. At the same time, we see a growing intolerance of conservative philosophy, with the banning of conservative speakers and tantrums ranging from violent riots to postponed exams to “cry-ins” and university sponsored “healing spaces” for stricken students who are exposed to ideas they find objectionable.

According to a recent survey by the Victims of Communism Memorial Foundation, one-third of millennials “believe more people were killed under George W. Bush than under Joseph Stalin.” Is it possible that so many do not understand the difference between a democratically elected American president and a murderous communist leader responsible for the deaths of tens of millions of his own people?

It is sad to think that so many could be so absurdly mistaken, but it is terrifying to think that so many do not grasp the implications of this question and the bearing it has on the freedom of people all over the world. When it comes to preserving our freedoms for future generations, do these young people meet Jefferson’s ideal of a well-educated citizenry?

Since its founding, Liberty University has unflinchingly promoted the fundamental principles of American freedom that have made this country the most free and prosperous nation on earth. In recent years, Liberty has taken its passion for these principles and built a platform for engaging in the most pressing debates of our time. In the last presidential election, Liberty hosted candidates Donald Trump, Ted Cruz, Bernie Sanders, and Gary Johnson to address students at its weekly Convocation.

With its rising profile, Liberty recently announced its new center for law and government. In collaboration with its School of Law and Helms School of Government, the center will be a place for the free exchange of ideas and the robust debate of issues of national and state importance.

In addition, the center will harness broad expertise in promoting public policy that is consistent with those fundamental principles of American freedom: self-government, free enterprise, and the rule of law. Finally, the center will ensure that every Liberty student graduates with a full appreciation for our Constitution and for the value of our freedom — and will be prepared to engage in a new generation of American statesmanship.

Liberty University is located on a hilltop in the heart of Virginia’s Blue Ridge Mountains. From its hilltop, Liberty enjoys virtually the same magnificent view of the mountains that certainly inspired founders Thomas Jefferson and James Madison in drafting our Declaration of Independence and our Constitution more than 200 years ago.

Today this view serves as a daily reminder of what our founders knew — that our freedoms do not come from government but from our Creator; that they are precious; and that they must be preserved. Here on this Virginia hilltop, we intend to do our part.

> Robert Hurt represented Virginia’s Fifth District in the U.S. House of Representatives from 2011 to 2017. Before that, he served in the Virginia General Assembly. Last month he was named director of the new center for law and government at Liberty University in Lynchburg. Contact him at rhurt1@liberty.edu.