Fog swirled around the darkened Vines Center as a heavy electric guitar riff erupted through the speakers Wednesday morning, ushering in World Wrestling Entertainment (WWE) icon Shawn Michaels to Liberty University Convocation. More than 10,000 students, who returned from Christmas break on Monday, roared with excitement as “HBK” (The Heartbreak Kid) strutted to a wrestling ring set up in the center of the floor. Michaels struck his signature pose, flexing his swollen biceps, and made quick work of sending twin LU Stages staff members Kyle and Will Scheren down on the mat (retribution for a prank they pulled on students last semester), while students chanted “HBK, HBK, HBK.” 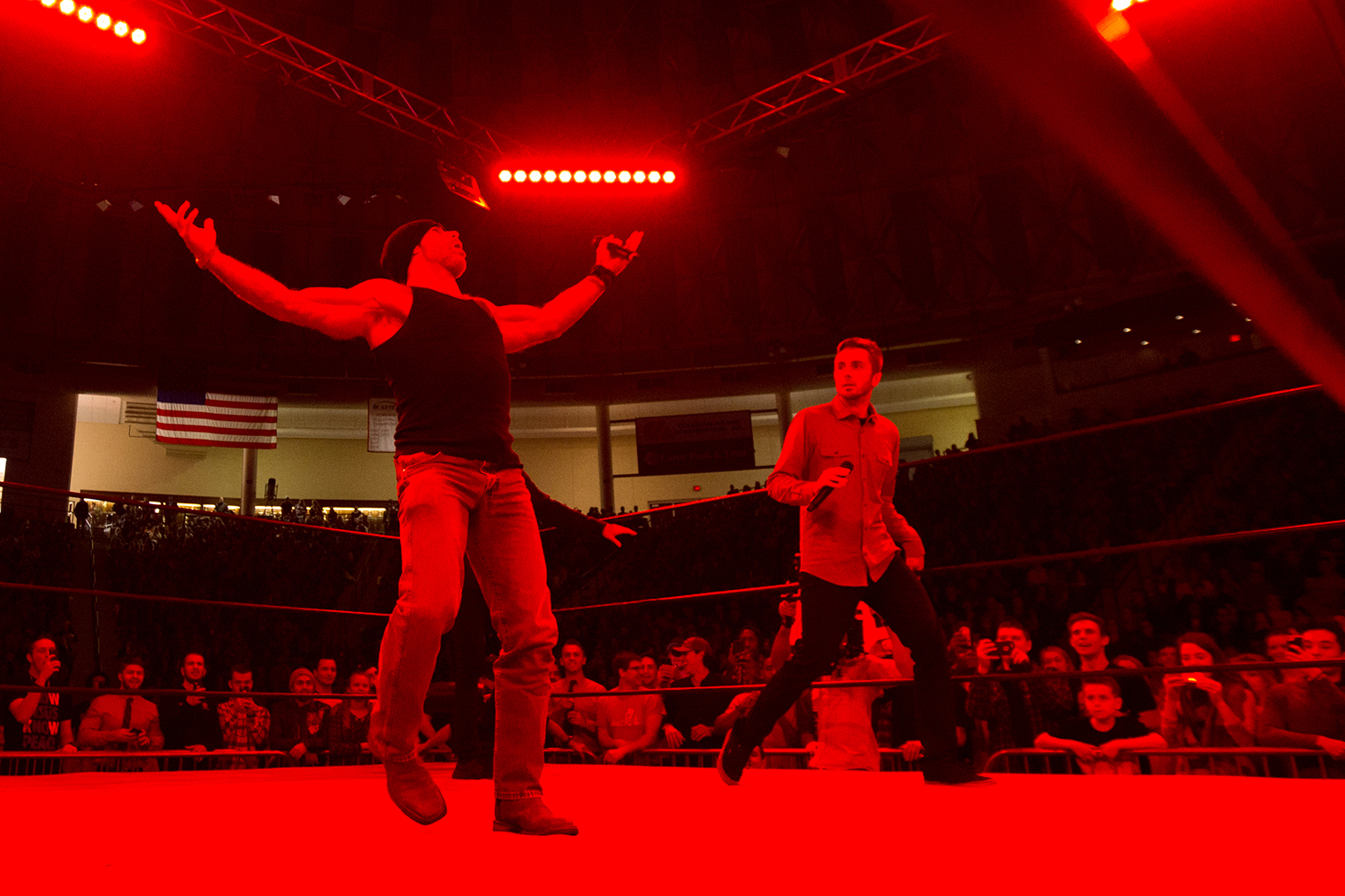 While the spectacle was certainly a crowd pleaser, it was part of a stage persona Michaels maintained in the limelight for three decades. On Wednesday, after giving students a taste of his showmanship, Michaels gave them something deeper.

“This is very different,” Michaels said in an interview before Convocation. “This is me coming … as Michael Shawn Hickenbottom — the guy whose life was radically changed by the Lord years ago.”

Michaels shared his testimony with the crowd, telling them that in the late 1990s, at the peak of pro wrestling fame, he was “empty as the day is long.”

After the birth of his first child, Michaels’ wife was convicted to strengthen her faith, and she began attending Bible study. As her life was transformed, she prayed for her husband’s to as well.

“The power of prayer is an amazing thing,” Michaels said. “Every night, after I would pass out, she would get in the closet and get down on her knees and pray for her husband.”

One day, while under the influence of substances, Michaels was holding his 2-year-old son, who said, “Daddy’s tired.”

The moment broke the wrestler as he realized that his child could tell that there was something wrong with him.

“That day, for the first time in my life, I finally loved something more than every selfish whim and desire that I had,” he said, his gravelly voice full of emotion. “It bothered me to the core that I wasn’t the man that I needed to be.”

Michaels visited a church the next day and soon after accepted Christ and got plugged into a Bible study. 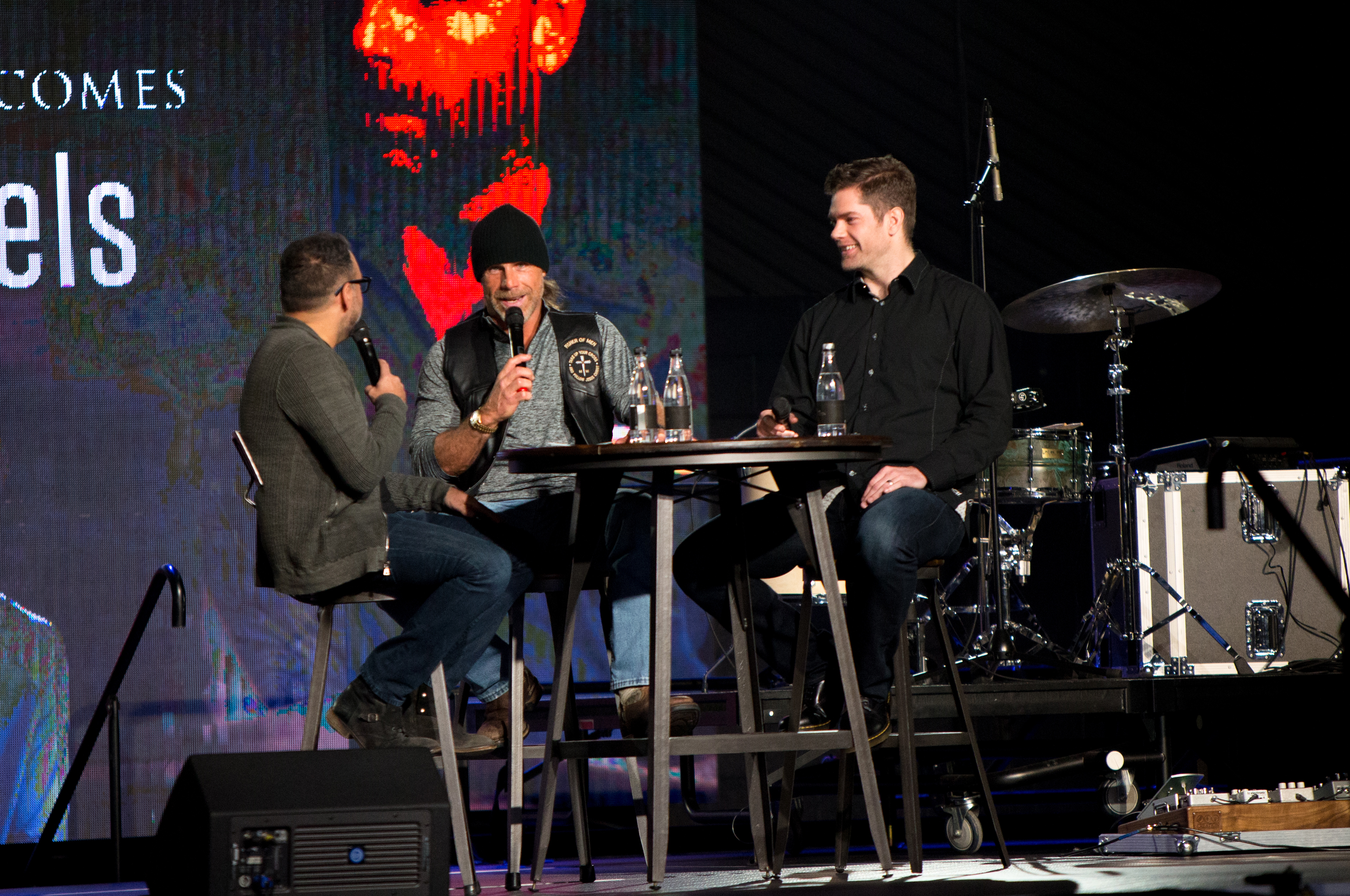 He began sharing his faith openly, even at WWE events. Surprisingly, the bad boy persona he had built made it easier for people to accept the changed man he had become.

“That same rebellious attitude is in me now; it is just used in a more positive direction,” Michaels said. “If the name of Jesus makes you uncomfortable, from a guy who gets a kick out of making you uncomfortable, it seems to work.”

Michaels plays a supporting character in the upcoming fish-out-of-water comedy, “The Resurrection of Gavin Stone.” The faith-based film opens Friday at select theaters across the nation, including Lynchburg’s Regal River Ridge Stadium 14. Liberty bought out three screenings and will be giving tickets away to students via social media.

The film’s director, Dallas Jenkins, joined Michaels in Convocation to talk about the project, which was produced with Chicago’s Harvest Bible Chapel. He showed the film’s trailer and an exclusive clip.

“Very few people talk about the opportunity to have an impact in Hollywood and to use popular culture and media as a place for salt and light,” Jenkins said. “I always believed the most important message in the world deserves the most influential medium in the world, film and television.”

Jenkins noted that the film — about a Hollywood vagrant who pretends to be a Christian in order to play Jesus in a church passion play and fulfill his community service hours — is testing well with both Christian and non-Christian audiences.

Michaels said he wanted to join the project because the characters were relatable.

“I appreciated the humor,” he said. “I can remember going into (church) for the first time and not understanding so many things. … To me it was, ‘finally Christians are making a movie that I totally get,’ and it isn’t going to make people uncomfortable … it was so natural.”

Jenkins praised Liberty’s Cinematic Arts, Zaki Gordon Center — where an advance screening of the film was held the night before for filmmaking students — for its commitment to producing stellar graduates to impact the industry.

Senior cinematic arts student Lane Stevens appreciated the opportunity to interact with Jenkins and Michaels during a Q & A after Tuesday night’s screening.

“They gave quality advice and insight to a room filled with up-and-coming filmmakers,” Stevens said. “They encouraged me, emphasizing that professional development is important, but in the long run it is the relationships with people and with Christ that matter more. … Getting to connect with professionals who have gone down the filmmaking road is an opportunity that not a lot of people get, especially having an open environment to ask questions and to learn from them.”

As an aspiring filmmaker, Stevens said that “The Resurrection of Gavin Stone” showed him how it is possible to make good, quality Christian films.

Michaels took pictures with students and signed autographs after Convocation. He said the visit made an impact on him.

“For me, what is encouraging is a great many of the students here have clearly been given an incredible foundation, and a security, and a courage to go out there and walk confidently in that, and it’s nice to see,” he said.