Students welcomed to campus with news of exciting improvements 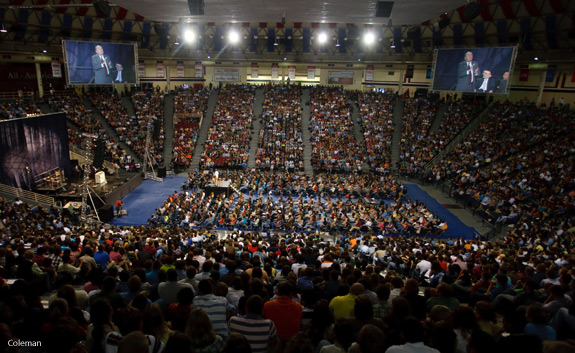 Students attend the first Convocation of the academic year on Wednesday, Aug. 25.

Summer break has come to a close for students at Liberty University as academic buildings, residence halls and student centers fill with friendly faces. Classes started on Monday, but Convocation on Wednesday morning officially kicked off the Fall 2010 semester.

Chancellor Jerry Falwell, Jr. welcomed students and excitedly announced several improvements to campus, the athletics program and leadership. He introduced the changes with words of thankfulness regarding God’s faithfulness to provide.

“Most private colleges in Virginia are fortunate to build one new building every 10 years,” he said. “We have been building about one every 10 months here at Liberty because of the way God has blessed this university.”

Falwell introduced the speaker, Dr. Elmer Towns, as the newly appointed dean of Liberty Baptist Theological Seminary. Towns, co-founder of the university, will remain dean of the School of Religion.

Summer break at Liberty was anything but a break for construction workers, faculty, staff and administration who worked on new projects and improvements. Here is a rundown:

The Bruckner Learning Center, Liberty’s campus-wide academic support center, has a fresh look in its new location in DeMoss Hall 3000.

The new Tower Theater in Campus North is a state-of-the-art facility that will host performances by the Department of Theatre Arts.

The first-phase addition to Williams Stadium is nearly ready for the start of the upcoming football season. The expansion includes 6,600 new seats and a 34,000 square-foot tower that will house a press box, luxury suites, classrooms and banquet facilities.

Liberty added disc golf to its list of student activities. The 18-hole, 59-ft. course is located on East Campus just past the intramural football fields. The increasingly popular sport is also an intramural option for students this fall.

Other changes this semester intended to make students’ lives easier are: post office improvements, including a new system for tracking packages and new drop-off locations around campus; expanded transit services between campus and several apartment complexes, featuring a new 40-foot bus; and vending machines throughout campus that accept credit cards and Liberty I.D.