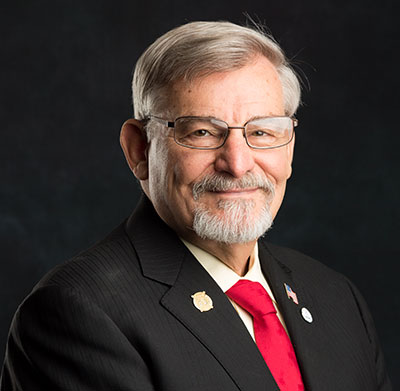 Before the Liberty University College of Osteopathic Medicine (LUCOM) opened its doors in 2014, Dr. Ronnie B. Martin, D.O., worked tirelessly to lay the groundwork and assemble a team of men and women who would make history at Liberty by establishing a medical school.

Provost Ron Hawkins recently announced that Martin has retired after four years of service as the founding dean.

“Dr. Martin played an indispensable role in setting the medical school on a good course,” Hawkins said. “He led us through the initial phases of accreditation, hired a highly competent team of faculty and staff, and established the med school curriculum. The season has now sadly come for us to say good-bye to Ronnie and (wife) Sherri as they move closer to their children and grandchildren and a new place of service.”

During his time at Liberty, Martin advanced the medical school’s mission to provide care for the medically underserved in Southern and Southwest Virginia by holding health clinics and establishing partnerships with area hospitals there, thus encouraging student-doctors to remain in the area upon graduation. Martin also worked to create affiliations and partnerships with health systems throughout the state. He worked closely with Central Virginia Family Physicians to form the Liberty Mountain Medical Group, a primary care clinic near campus where Liberty students-doctors receive training. Martin also led outreach trips for student-doctors and LUCOM staff in Guatemala.

In founding the medical school, he played a key role in seeing the four-story, 144,000-square-foot Center for Medical and Health Sciences through to completion. Additionally, he helped LUCOM receive provisional accreditation from the American Osteopathic Association Commission on Osteopathic College Accreditation, the programmatic accreditor for colleges of osteopathic medicine in the United States, making it eligible to receive full accreditation prior to graduating its first class of student-doctors in 2018.

Martin was a practicing physician for more than 20 years before coming to Liberty, serving as an emergency room doctor, a family physician, and a director of medical clinics. He has served on multiple American College of Osteopathic Family Physicians (ACOFP), American Osteopathic Association (AOA), and state and federal government health care-related committees and boards. He presently serves on the Commission for Osteopathic College Accreditations. In 2015, Martin received the Lifetime Achievement Award from the ACOFP for his career-long service to the profession of osteopathic family medicine. Martin has worked at six medical schools and has helped establish two.

“My time at LUCOM was the highlight and the peak of my career,” Martin said. “God had been leading me to Liberty for many years, and I finally listened and followed where He was leading me. It was absolutely a joy to myself and to my family.”

Martin and his wife, Sherri, will continue to serve LUCOM on a consultant basis as the school searches for a new dean. 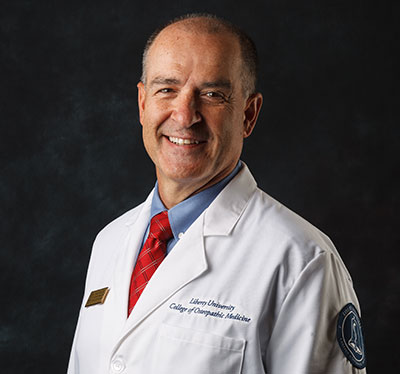 Hawkins announced that Dr. David Klink, D.O., chair of the department of specialty medicine and associate professor of ophthalmology at LUCOM, will serve as the interim dean.

“Dr. Klink is a seasoned osteopathic physician and he brings a breadth of experience and leadership ability to lead us through this interim period,” Hawkins said.

The university has retained Carter Baldwin, a professional search team, to initiate a national search for a new dean.

Martin said that he is confident that LUCOM will continue to grow and fulfill Liberty’s mission to train Champions for Christ.