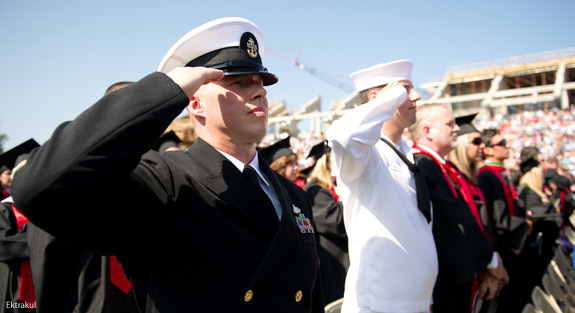 The Class of 2010 included 995 military students, with 985 taking courses through Liberty University Online.

The record numbers come at an appropriate time, as Congress has designated May as National Military Appreciation Month, ending with Memorial Day to commemorate U.S. men and women who died while serving our country.

Many Liberty military students also joined the ranks of Liberty alumni this year. The Class of 2010 included 995 military students (10 residential and 985 online). A large group of LU Online graduates, 249, were present at Commencement.

Earlier this year, Liberty was ranked as a military-friendly school by “GI Jobs” magazine and was ranked No. 18 out of the 50 most popular military schools in the United States in a survey conducted by “Military Times EDGE” magazine.

Chancellor Jerry Falwell, Jr. said Liberty has always made its military population a top priority.
“Our servicemen and -women deserve the opportunity and aid for a smooth transition back into civilian life. After pausing their education to defend our country, they ought to have a strong educational base to build on. That’s why Liberty University makes such a strong effort to assist military personnel in accessing higher education.”

At Liberty, military students can choose from 40 degree programs that are specially designed for their schedules.

The university also provides a variety of support services for its online military students, including a vast online library, bookstore and writing center. Online ministry services and several online support groups allow military students to connect and encourage one another as they serve our country.