Even before its scheduled June opening, Liberty University’s 1,600-seat fine arts auditorium in the School of Music’s Center for Music and the Worship Arts is receiving accolades from industry professionals.

The Steel Erectors Association of America (SEAA) has selected the state-of-the-art concert hall as the recipient of the 2016 SEAA Class III ($1-2.5 million) Project of the Year for the steel portion of the structure. Representatives from Commercial Steel Erection (CSE) Inc. will accept the award at SEAA’s 44th annual Convention & Trade Show, April 27-29 in Concord, N.C.

According to the SEAA website, the group recognizes complex and unique steel erection projects throughout the world, spotlighting those that have been constructed under unusual conditions, tight time constraints, or other challenges.

The Center for Music and the Worship Arts is being constructed by Construction Management Associates (CMA) Inc. and is one of several projects in Liberty’s half-billion-dollar campus rebuilding.

The auditorium will be versatile enough to serve as either a concert hall or a performing arts theater, and the layout can be reconfigured to accommodate smaller audiences in a more intimate setting.

The auditorium is the second phase of construction at the 140,000-square-foot facility; a four-story educational center opened last fall. 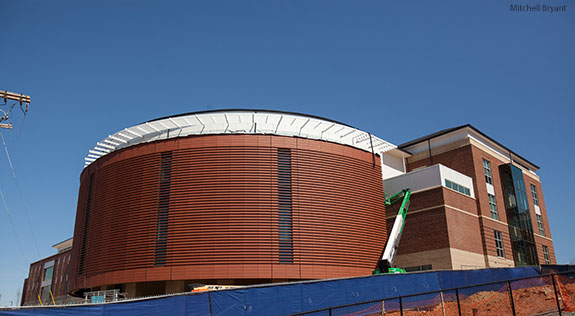 The Center for Music and the Worship Arts under construction on March 30, 2016.