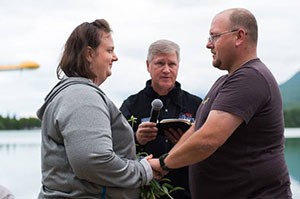 Dr. Steven Keith (Chap. Col. USAF Ret.), director for the Liberty University Center for Chaplaincy in the School of Divinity, served with Operation Heal Our Patriots, a Samaritan’s Purse initiative, from July 4-31.

Operation Heal Our Patriots is a marriage retreat held in Port Alsworth, Alaska, that helps wounded veterans and their spouses heal and refresh their marriages. The weeklong retreats consist of morning and evening couples counseling, as well as outdoor activities such as fishing, hiking, and bear watching.

“These military members have been inflicted with grief and turmoil, which is the result of traumatic injuries and the tragedies of war,” Keith said. “At this retreat, married couples are encouraged to communicate spiritually, mentally, and emotionally and to share things that they may not have been able to share before.”

Keith said that the twice-daily seminars focused on communication skills as the key to building strong lasting relationships. During the seminars, chaplains also share the healing power of the Gospel message.

“By the end of the week, we see many individuals accept Christ as Lord and Savior and others renew their faith in Christ,” Keith said. “The veterans are able to relate to chaplains because they understand chaplains are one of them and have also shared the tragedies of war.”

During his time at the retreat, Keith and the chaplain team saw six to eight couples renew their marriage vows each week.

“What amazing joy to see couples who were struggling with marriage, and some even ready to divorce, offer one another God’s forgiveness and commit to building their marriages on the love of Christ,” he said.

Keith formerly served as commandant of the U.S. Air Force Chaplain Corps College and as director of the Armed Forces Chaplaincy Center at Fort Jackson, South Carolina. Following retirement, he accepted the director of chaplaincy position with Liberty in 2014. Dr. Keith has been in consultation with senior chaplain officials at the Pentagon to ensure Liberty’s educational programs meet the highest standards and best equip chaplains for ministry in the Army, Navy, and Air Force. He is also working with Liberty’s Graduate Senate to make certain that any changes made to strengthen the program meet the highest educational rigor and can be implemented swiftly.

Liberty launched its Center for Chaplaincy last fall to sharpen its vision and develop cutting-edge chaplaincy education and programs. Liberty is currently the largest educator of chaplains for the military.