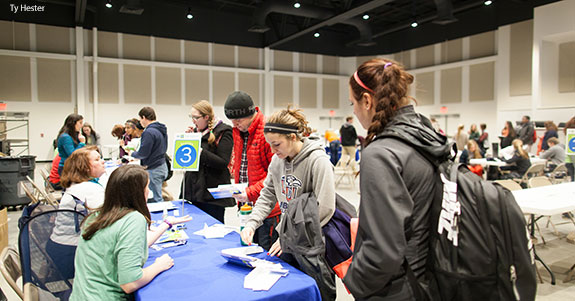 According to Dan Gariepy, Be The Match’s community engagement representative for Virginia, the university’s drive was the largest turnout he has witnessed in his time with the organization.

“Amazing — that’s really the one word to describe it,” Gariepy said. “The support we got from the Liberty community was off the charts, amazing. I really believe there’s something special in those students.”

Be The Match, an organization operated through the National Marrow Donor Program (NMDP), manages the largest and most diverse marrow registry in the world.

Dr. Megan Cordes, Math Emporium assistant coordinator, initiated Liberty’s drive on behalf of her team after hearing about a co-worker’s unsuccessful search for a bone marrow donor. Debbie Kelly, Math Emporium staff tutor, has been battling cancer since 2004 and was recently diagnosed with a myelodysplastic syndrome (MDS), for which the only cure is a bone marrow or cord blood transplant.

“When (Liberty) decided to do this, they really took it and ran with it,” Kelly said. “They went above and beyond. I’m very, very thankful to know them and work with them.”

In addition to an application, registering to become a donor required a cheek swab for DNA. The drive was so heavily attended that volunteers ran out of swab kits. A temporary website, http://join.bethematch.org/LibertyU, was set up to allow applicants to receive a home-swabbing kit which they can send back to become a registered donor at no cost. The URL will be live for 80 days.

“It’s a numbers game,” Gariepy said. “The more people that join the registry, the more chances people have to find matching donors.”

Although it will be several weeks before Kelly is notified of any matches, she is confident in God’s ability to provide the bone marrow she needs.

“I think God is going to do a miracle and provide a 100 percent match donor from that drive,” Kelly said.  “We’re just waiting and praying.”

Regardless of the results, Kelly said the awareness raised for bone marrow donors was an accomplishment.

“They did a great job of representing Christ and being His hands and feet (to) the people who need a bone marrow transplant.”