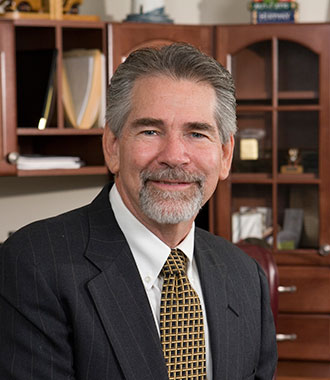 President Jerry Falwell announced today that Dr. Ronald Hawkins will be Liberty University’s next provost. Hawkins, who has served the university in a variety of capacities for decades, has been the university’s interim provost since the retirement of Dr. Ronald Godwin.

Hawkins has served in several positions at Liberty. Before joining the provost’s office he served as dean of the College of Arts & Sciences from 2000-06. He is the founding dean of Liberty’s new School of Behavioral Sciences, which was formed last fall, and was vice president for Academic Affairs and vice provost prior to assuming the role of interim provost.

“Dr. Hawkins has been a loyal Liberty stalwart for decades,” Falwell said, noting that Hawkins was a professor when Falwell was a student in the early 1980s. “I can’t think of anybody better to lead the provost’s office. I am just thrilled that he agreed to be our provost.”

As provost, Dr. Hawkins will act as the chief academic officer and administrative advocate for Liberty’s undergraduate and graduate programs. The provost is responsible for developing organizational structures, administering the academic budget, and appointing personnel to manage and execute the functions of all educational programs. Additionally, the provost manages the establishment of all creative and interdisciplinary academic programs offered through the university’s residential and online venues, as well as oversees the appointment and evaluation of faculty members and academic administration necessary for the maintenance of those programs.

Dr. Hawkins has served in Liberty’s provost’s office since 2006. In addition, he has over 20 years of experience in mental health counseling, counselor training, and consulting. Hawkins holds an Ed.D. in counselor education from Virginia Tech, a D.Min. from Westminster Theological Seminary, an Ed.S. from Lynchburg College, and an M.Div. from Gordon-Conwell Theological Seminary.

Hawkins said that he is humbled to have been chosen to serve as provost.

“I am deeply honored to be able to finish my career at Liberty in this very important posting,” Hawkins said. “I have been at Liberty for a long time; I love this place, I love the faculty, the leadership. I will do everything that I can to advance Liberty’s reputation as a world-class university. I am also very grateful that I have such an excellent team of associates and faculty working with me. I am delighted to be able to interact with them and to provide leadership for them.”