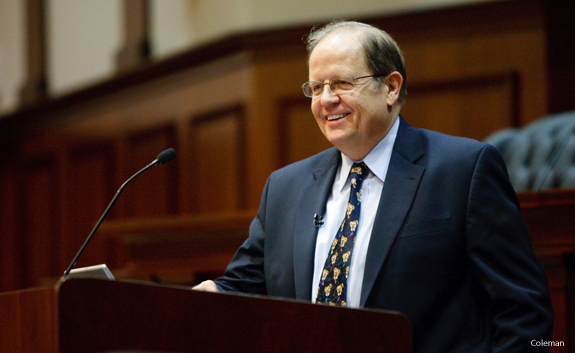 Dr. Ted Baehr, chairman of the Christian Film & Television Commission and founder and publisher of Movieguide magazine, challenged Liberty University School of Law students to be successful in Hollywood.

“There’s nothing stopping you from making a difference, except your own fears,” he said Monday, Nov. 30 in the law school’s Supreme Courtroom.

Dean Mat Staver called Baehr “the most influential Christian in the film and entertainment industry” and a “real driving force” in the field.

Baehr, who was president of the organization that produced “The Chronicles of Narnia: The Lion, Witch and the Wardrobe” for CBS in 1980, is also a noted critic, author, educator, lecturer and media pundit. His Movieguide is published every four weeks and offers moviegoers analyses of current films from a biblical perspective. In addition to issues of violence, sex and profanity, Movieguide tackles moral issues and worldviews of the movies, videos and TV shows it reviews.

Baehr, whose father Bob “Tex” Allen starred in movies in the 1930s, said the church has helped clean up Hollywood and that family friendly movies always perform better at the box office than many R-rated films.
“It’s better to sell four tickets to a family than one ticket to a teenager,” he said.

Baehr also said people are turned off by curse words and sexual material in films. He showed an L.A. Times and Bloomberg poll that revealed that 74 percent of girls and 58 percent of boys between the ages of 12 and 24 are offended by those types of movies.

“People want good to triumph over evil,” he said.