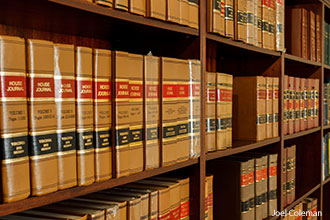 The Hon. Lacey Putney, the longest-serving state legislator in Virginia history, donated about 250 books from his Bedford law office to the Ehrhorn Law Library at Liberty University School of Law.

“We are honored to accept this generous donation of a portion of Del. Lacey Putney’s personal library for use in (the law school library),” said Mat Staver, dean of the School of Law.  “Del. Putney’s 53 years of distinguished service to Virginia and his community as a legislator and 54 years as a lawyer may never be equaled. Our goal is that Liberty Law graduates will follow in the footsteps of true statesmen like Del. Putney.”

Putney practiced law for 54 years and served in the Virginia House of Delegates from 1962-2013, making him the longest-serving member in the history of the Virginia General Assembly. During this time he won 26 consecutive elections.

At Liberty’s Commencement ceremony in May, President Jerry Falwell presented Putney with an honorary Doctor of Humanities degree. Falwell praised Putney for his service, calling him a great American and “a legendary leader in the Commonwealth of Virginia.”

Putney said that no honor he has ever received is equal to the one bestowed upon him by Liberty.

According to Falwell, Putney played an indispensable role in many of the most important decisions made in Virginia over the last half century, including the creation of the Virginia Tuition Assistance Grant (VTAG) program and the six-year capital outlay planning process to help maintain the commonwealth’s coveted AAA credit rating. He has served as speaker of the House of Delegates, as a member of the House Committees on Rules and on Privileges and Elections, and was chairman of the House Committee on Appropriations.

Falwell noted that Putney has earned bipartisan respect for his dedication to Virginia’s citizens and legislative leadership, “an achievement that is almost unheard of in the polarized political climate of today.

“Lacey Putney maintained a reputation as a deeply committed, selfless public servant who was entirely committed to the well-being of his constituents and their communities,” Falwell said. “His illustrious career has made our state a better place to live and to work, and his service is without parallel.”

In addition to the gift to Liberty’s law library, the university’s main library, the Jerry Falwell Library, received an extensive collection of books collected by the late Dr. Homer Blass, a longtime professor in the Department of History who died on June 27, 2013 at the age of 73.

Dr. Blass was an associate professor of history at Liberty University from 1983 until his retirement shortly before his death. He is survived by his wife, Linda, and their son, Scott, who made the generous donation to the library.

Blass’ interests are reflected in his books, which range from American history to modern European politics and international diplomacy.

“Dr. Blass was a beloved professor and bibliophile. His library and his detailed command of bibliographical literature was the stuff of legend within the History Department,” said Dr. Roger Schultz, dean of the College of Arts & Sciences. “His collection provides excellent sources for modern American and modern European history. We are delighted with the gift of the Blass library, thankful that future generations of Liberty University students will profit from this outstanding collection.

“Blass’ students and colleagues were always blessed by his cheerful disposition, humble demeanor, and seemingly endless knowledge of history. Students in years to come will reap the benefits of his love of books, history, and our library by having access to these materials donated in his memory.”