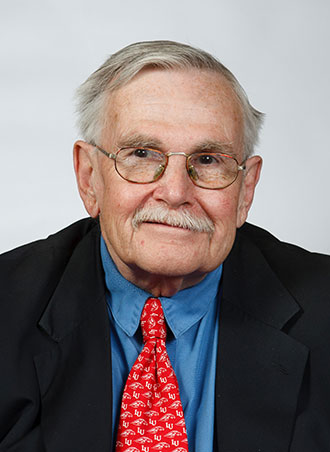 Blass came to Liberty in the fall of 1983 and was an associate professor of history before his retirement in June of this year. He has taught a wide range of courses, including American History I and II, Modern Russia, Modern Germany, Modern Middle East, British Empire, American Diplomacy, and American Military History. He was widely loved and respected by his students and colleagues.

“Homer Blass exemplified Christian collegiality and the life-long love of learning. All of us profited from Homer’s encyclopedic historical knowledge, admired his ever-present good cheer, and respected his devotion to his family,” said Dr. Roger Schultz, dean of Liberty’s College of Arts & Sciences.

Blass is survived by his wife, Linda, and their son, Scott.

He was recently honored for his 30 years of service to Liberty during the university’s annual Years of Service Banquet, though he was not able to attend in person.

At the banquet, Chancellor Jerry Falwell, Jr. said Blass “made a lasting impact on his students.” He quoted one student as saying Blass was “one of the greatest teachers in the profession” and “a kind and loving genius with an adorable, wonderfully quirky personality.”

An avid book collector since junior high school, Blass’ extensive collection boasts more than 20,000 titles. Faculty in the History Department often joked they could not move to the top floor of Arthur S. DeMoss Learning Center because it could not support the collection.

A memorial service for Blass will be held on Thursday, Aug. 1, at 1 p.m. at Thomas Road Baptist Church. Those wishing to make memorial contributions are asked to consider the Liberty University Jerry Falwell Library, Gleaning for the World, or the American Cancer Society.