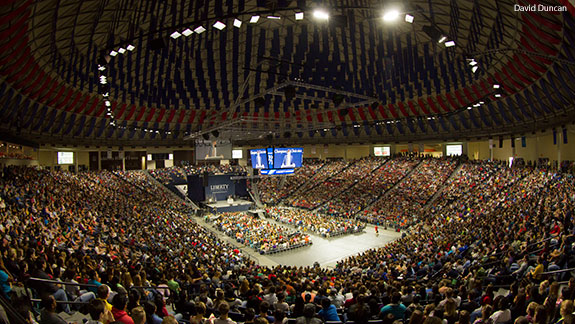 A new chapter opened at Liberty University on Wednesday, as students attended the first Convocation of the school year in the newly renovated Vines Center and were introduced to the new senior vice president for Spiritual Development, David Nasser.

President Jerry Falwell welcomed new and returning students and spoke about the upgrades that took place to many facilities over the summer. The Vines Center interior was almost completely reworked to accommodate 1,400 additional seats, and improvements were made to lighting and acoustical systems. Across campus, upgrades were made to dining services for expedited wait times, longer hours, more choices, and better food quality. Students, faculty, and staff now have access to an expanded recreation center. The new high-rise residence hall, Residential Commons I, also opened in August.

“It really is nothing short of amazing what they have accomplished this summer … we wouldn’t be here without (them),” Falwell said.

As Liberty continues to grow, he said it is important that the university maintains its spiritual vitality. When Johnnie Moore, former campus pastor, left Liberty earlier this summer to work on Bible-based projects for film and television producer Mark Burnett, Liberty’s leadership sought out Nasser, who founded Christ City Church near Birmingham, Ala., five years ago and served as its senior pastor.

“I believe God sent David Nasser here to do a mighty work. He has some really exciting ideas,” Falwell said. “What I like most about David Nasser is that he is genuine. I keep noticing how well he treats everyone — no matter their station in life — with the same level of respect, (as) Jesus did.”

Nasser has spoken at Convocation many times in the past and addresses about 500,000 people at various events each year through his organization, D. Nasser Outreach.

Nasser has wasted no time acclimating to his new role and has already spoken to the student body for Spiritual Emphasis Week, kicking off the semester on a spiritual high note. He told the students on Wednesday that his priority is to get to know them on a personal level and invest in their lives, which he demonstrated by showing his cell phone number on the videoboards overhead.

“The more (me and my family) get to know you as students, the more we continue to nod our heads and say, ‘Wow, God’s wind is moving the sails of this thing called Liberty.’”

Nasser helped the students get to know him better by sharing his personal testimony. Though his zeal for the Lord radiated as he spoke, Nasser revealed that his road to salvation was plagued with darkness. At the age of 9, living in Iran, he became embittered against religion, witnessing massacres in the name of God as his family suffered through the Iranian Revolution.

After his family fled to America, Nasser struggled with loneliness as he grappled with adapting to a new culture. As he entered high school, Nasser learned to fit in, but, he explained, this was only a mask to hide his inner struggles.

Once he graduated, Nasser again found himself on a dark path, revisiting those feelings of animosity toward God. But through the love and perseverance of friends at a local church, he eventually found himself confronted with the Gospel. He tried repeatedly to run from God, even going as far as to literally run out of a church service. But when he got home, he said he was overwhelmed by God’s grace and accepted Christ.

Over the next two-and-a-half years his entire family — which was nominally Muslim and initially rejected Nasser because of his newfound faith — came to know Christ one-by-one.

He declared that to this day, “I continue to hate religion, but now I love Jesus.”

“We both had to meet at the foot of the cross,” Nasser said. “That is where we are going to begin (here at Liberty) — with the Gospel.”

Students have expressed their support for Liberty’s decision to hire Nasser.

Jenna Overton, a sophomore, said she misses Moore but thinks Nasser is an “awesome addition.”

“They both get you really excited about the Word,” she said. “I really enjoyed Johnnie last year (and) I thought (Nasser’s testimony) was very powerful.”

“I like his passion and fire,” junior Greg Castel added.

Jordan Redden, a sophomore, appreciates how Nasser relates to the student body.

“I just love how joyful he is about the Gospel … he shows genuine care for us as students,” she said. “When you have somebody in leadership that really wants to have a personal relationship with students, it just makes you more excited to learn and grow.”