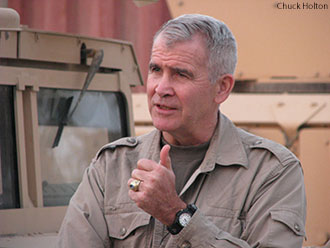 Retired United States Marine Corps Lt. Col. Oliver North will visit the Liberty University Barnes & Noble Bookstore at noon on Thursday, June 12, for one of the first stops on a book tour for his latest novel, “Counterfeit Lies,” scheduled to be released by Threshold Editions on Tuesday.

North served for 22 years as a Marine and has been awarded the Silver Star, the Bronze Star for valor, and two Purple Hearts for wounds received in combat. He was the U.S. government’s counterterrorism coordinator on the National Security Council staff from 1983-86 and is the host of “War Stories with Oliver North,” an award-winning documentary series on the FOX News Channel.

All 13 of North’s previous books have become New York Times best-sellers. “Counterfeit Lies” is North’s latest fictional release, following “Heroes Proved,” the fifth in his series depicting the clandestine missions of U.S. Marine Peter Newman. North’s autobiography, “Under Fire: An American Story,” was published in 1991. Other works of nonfiction by North include “American Heroes in the Fight against Radical Islam (2008),” “American Heroes in Special Operations (2010),” and “American Heroes on the Homefront (2013).”

North serves on the Board of Directors of the National Rifle Association and is the founder of Freedom Alliance, a foundation providing college scholarships to the sons and daughters of U.S. military personnel killed in the line of duty. Liberty also supports active servicemen and women and their families, providing grants and scholarships through the Office of Military Affairs.

The two-week, 36-city book tour started Saturday at the Marine Corps Base at Camp Pendleton, Calif. Following the approximate one-hour stop in Lynchburg, Va., on Thursday, the bus tour will proceed to Barnes & Noble in Roanoke, Va.

A total of 600 copies will be available for purchase at Liberty’s bookstore; visitors must purchase a copy to receive an autograph.