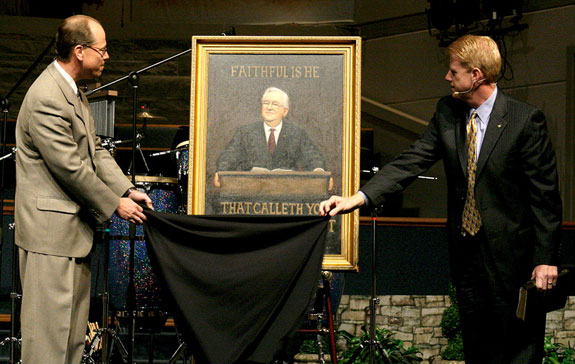 The Rev. Jonathan Falwell gets some help from the Rev. Mike Frazier, pastor at Canton Baptist Temple in Canton, Ohio, as he unveils a portrait of Dr. Jerry Falwell at an induction ceremony for the Christian Hall of Fame.

Dr. Jerry Falwell, founder of Liberty University, was honored in an induction ceremony for the Christian Hall of Fame on Wednesday, Sept. 23, at Canton Baptist Temple in Canton, Ohio.

For many years, Canton Baptist Temple was one of the 10 largest churches in America. In 1966, Harold Henniger, then pastor, felt there should be some hall of fame in the United States to recognize the influence of the great heroes of the faith throughout the centuries. (The Football Hall of Fame for the National Football League is located in Canton). Today the church's Christian Hall of Fame is a broad-based representation of history makers and those who influence the world today, including the Apostle Paul, Martin Luther, John Wesley and Charles Finney, among others.

“Jerry Falwell, Sr., is honored for having been one of the great heroes of the faith in the last century and this century until his death May 15, 2007,” said Mike Frazier, pastor of Canton Baptist Temple.

The induction ceremony was held during the annual meeting of the pastors of Baptist Bible Fellowship. The pastors rose to applaud in appreciation for the great contribution Jerry Falwell has made to the Fellowship.

Jonathan Falwell spoke in appreciation for his father, noting the great lessons he learned while serving with him at Thomas Road Baptist Church. Jonathan Falwell was also the featured speaker that evening.