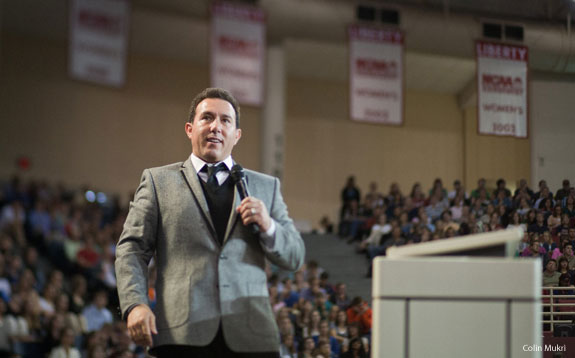 De La Mora is the founder and pastor of Cornerstone Church in San Diego, Calif., one of America’s fastest growing churches, according to a ranking in Outreach Magazine.

During Convocation, he used his book, “The Heart Revolution: Experience the Power of a Turned Heart,” and the story of the Good Samaritan in Luke 10:25-37 to illustrate the message of how to be a heart revolutionary.

“If there was ever a time and moment in history as a nation that God wants to raise up heart revolutionaries it's now,” De La Mora said. “ We need people that will go to their sphere of influence and bring dramatic change and establish the supremacy of the Kingdom of God so that His kingdom will come and His will be can done.”

De La Mora focused on three “heart qualities” that a heart revolutionary should have: they should never forget the pain of the person who is being rescued, that turning hearts of others is their business, and they must risk their reputation and resources to love people back to life.

He explained that the way to reach the world is by going “heart to heart” with them instead of “head to head.” By following Jesus’s example with the lawyer in the Good Samaritan, it is not always about intellectual ability, but the compassionate desire to help others, he said.

De La Mora also reached the Hispanic community by speaking in Spanish about this subject for a brief moment, with students energetically responding to his message.

He closed with a charge to students:  “[Jesus is asking you] ‘Will you go now and let you me use you to capture this generation?’  I believe now is the time, this is the university that is doing it. So Liberty, now it’s your time, it’s your hour to make a difference in this generation.”