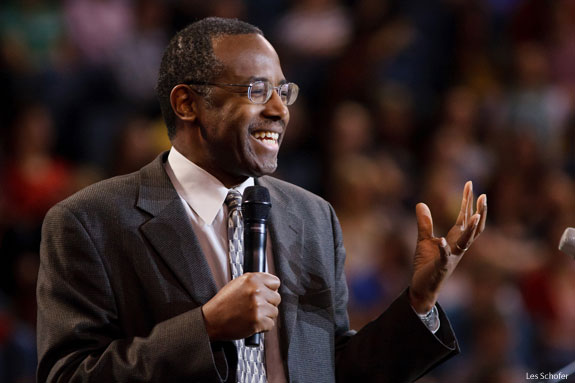 Dr. Ben Carson, a world-famous pediatric neurosurgeon, spoke at Liberty University’s Wednesday convocation about the importance of standing up for your beliefs.

“It is so important in the world in which we live, where secularism has such a loud microphone, that you stand up for what you believe in,” Carson said. “It’s going to require courage and people to stand up and be counted.”

Carson, Director of Pediatric Neurosurgery at Johns Hopkins Hospital, is universally considered one of the best physicians in the world. He is the only doctor to successfully separate a pair of Siamese twins conjoined at the head.

In 2008, President George W. Bush presented Carson with the Presidential Medal of Freedom, the nation’s highest civilian honor. Carson has 60 honorary doctorates and holds one of the 20 foremost positions in science, according to both CNN and TIME magazine. He was selected by the Library of Congress as one of America’s living legends.

Carson has authored several books, including “Gifted Hands” and “America the Beautiful,” for which he held a brief book signing following convocation.

During his speech, he explained that political correctness is a destructive force that threatens to destroy our nation.

Rather than focusing on unity of thought, Carson proposed, we should learn to respect those with whom we disagree.

Throughout the message, Carson unfolded chapters of his life story -- how he overcame adversity in almost every aspect of his life, from a poor single-parent home to struggling in the classroom and to his problems with rage and the journey he took to realize his calling to be a neurosurgeon.

“When God fixes a problem he does not do a paint job, he fixes it from the inside,
Carson said of his personal transformation.

He emphasized the importance of spiritual and intellectual development, and his concern for the current state of the nation in those regards.

“The founders of our nation said that once the populous becomes ignorant, they become easily led by slick politicians and our system of government will fail,” he said.

He called for our nation to return to an education system with high standards and teaching values in the classroom.

He explained the complexity of the human brain – during which he unloaded a rapid torrent of medical terminology to illustrate the complex process it takes for one to think of an answer to a simple question and then raise their hand.- and how we have a responsibility to seek to grow in wisdom and knowledge.

Carson challenged the student body to emulate the persistence that has maintained America as “One nation, under God, indivisible, with liberty and justice for all.”

Before delving into his speech, Carson acknowledged Liberty students Hannah and Ben Walker, whose mother he had trained as a neurosurgeon nurse at Johns Hopkins. Their families are close and have celebrated several Christmases together.

“He is inspirational in my life,” said Ben Walker, who was named after Carson. “I look up to him so much; I know a lot of people do.”