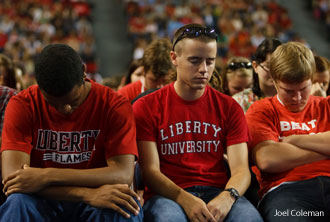 During Friday’s convocation, the Liberty University community remembered the events of September 11, 2001, honoring lives that were lost, praying for victims’ families and paying tribute to those who serve our country.

Liberty University School of Law student Mark Finelli gave his emotional testimony of being on the 11th floor in the South Tower of the World Trade Center when the second plane hit.

“I felt everything shaking, I smelled jet fuel … I thought the other building had collapsed on the South Tower and obviously that was not the case … it was a very gruesome sight outside the South Tower,” he said.

That day Finelli decided to join the Marine Corps, enlisted a few months later and was eventually deployed to Iraq. 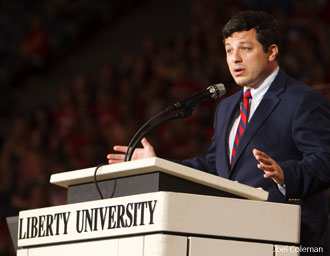 He read from an interview he gave after the tragedy in 2001, in which he said, “ ‘I am in total disbelief that I was in there and that I’m still alive. I thank Jesus a million times.’ ”

“It was faith in God that got me through the days following 9/11. It was my faith that got me to Iraq,” Finelli said.

“Taps” was played as Liberty students observed a moment of silence.

Throughout the Liberty community, there are clear memories of that day 10 years ago.

Campus pastor Johnnie Moore was a freshman at Liberty sitting in Arthur S. DeMoss Learning Center Room 1113 when the first plane hit the tower. He said it was clear that something tragic had happened because everyone’s cellphones were ringing at the same time. Televisions were set up all around campus to watch news coverage of the event and shortly after all the students met together, he said.

“Dr. Falwell called a prayer meeting and we all gathered in the Vines Center. Liberty students interceded on behalf of their nation and they prayed with that kind of commitment that you only pray with when there is a sense of desperation in the air. I’ll never ever forget that moment,” Moore said.

“That’s what makes a place like Liberty so important,” he added. “We preserve what makes America so unique. We pray on behalf of our nation.” 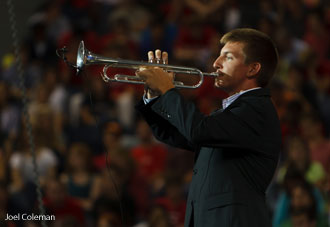 Colonel Richard Hinkley, chief of Liberty University Police Department, was a sergeant at Liberty at the time.

“The biggest thing we did that morning was pray for everybody -- not knowing exactly what had happened or what would happen with the collapse of the building or the stuff at the Pentagon,” he said.

Even though Liberty’s current students were as young as 7 years old on Sept. 11, 2001, they still have their own stories to tell.

Senior Bethany Keef recalls, “My dad was in the Pentagon when it was hit by the airplane. I remember assuming he was OK because I was young and innocent … I didn’t realize how many people had died. I had a friend that came over to my house and he wasn’t as lucky as our family was.”

Keef’s father survived, having been on the other side of the Pentagon. She said he was supposed to have been in a meeting on the side where the plane hit, but never received notice of the meeting.

Liberty will also observe a moment of silence before kick-off at its first home football game on Saturday. On Sunday, students will participate in a special remembrance held at Thomas Road Baptist Church.