While many of their peers are just starting to drive cars, 54 high school students in the U.S. Air Force Junior Reserve Officer’s Training Corps (AFJROTC) are training to become pilots in a summer program at Liberty University School of Aeronautics (SOA).

The cadets (mostly rising juniors and seniors) have been awarded scholarships by the Air Force to earn their private pilot license. All expenses, including housing, food, equipment, and flight training costs, are covered by the Air Force. The scholarships are part of a nationwide $2.4 million USAF effort to address the pilot shortage (over 500,000 pilots will be needed over the next 20 years, according to a report by Boeing) and to help increase diversity in the aviation industry. Liberty was one of just six partner universities chosen to train the selected applicants this summer. More cadets are training at Liberty than any other institution. This year, the Air Force approved 120 scholarships and plans to grow the program to 250 scholarships next year, with 1,200 annually in the future. 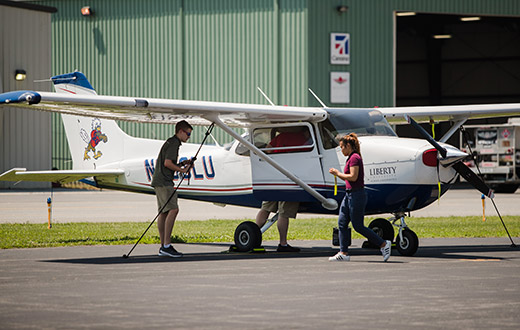 “We will take them from zero flight time to having their private pilot’s license,” explained Tony Cihak, the SOA’s chair of flight science. “It’s a very aggressive, intense program where our students are flying as much as four times a day, twice in the front seat of a (Cessna) Skyhawk and twice in the back observing, as well as a lot of ground and simulator time with our instructor corps here. As a junior or senior in high school, (the cadets) are beginning to see the passion they may have for aviation.”

The Air Force hopes to attract high achieving cadets from the program to become its next generation of pilots and help fill its share of the national pilot shortage, about 2,000 pilots.

“A university-based pilot training program provides more than just flight training to earn a private pilot license,” said Jim Molloy, dean of the SOA. “Our program focuses on leadership development, character development, and other needed skills such as communication, critical thinking, problem solving, and decision making. The Air Force JROTC leadership recognized these attributes in our aviation program, which is why they recruited us to be a part of the JROTC flight academy program.” 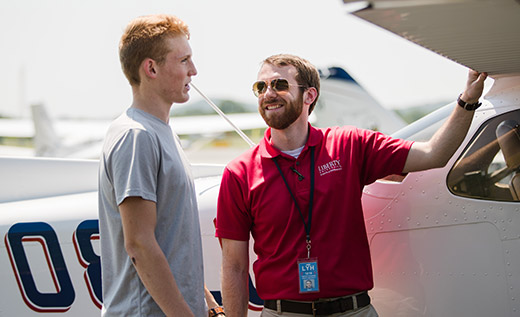 The 54 cadets came to campus for six-to-eight weeks of training, with the first group arriving May 28. Cadets will be training through August. While on campus, they are enrolled as Liberty students and take four academic courses (12 university credit hours) in the Private Pilot Certificate program.

Cihak said this gives them a head start in college with a year’s worth of flight training completed.

As part of the program, Liberty is preparing the cadets for the Federal Aviation Administration (FAA) practical evaluation — required to obtain a license — and will schedule FAA evaluators to administer both the oral and flight tests.

Interested in a future military career, Elijah Seals, a cadet from Phoenix, Ariz., knew an Air Force scholarship and a private pilot license were too valuable to his résumé to pass up.

“This is an opportunity I just could not miss,” he said. “It’s once in a lifetime. It gives you that jump-start in your career to push you forward.”

Seals, who at 16 is one of the youngest cadets, plans to stay an extra week in Lynchburg so that he will be eligible to take the FAA evaluations on his 17th birthday on July 24, a few days after the first session wraps up.

But the community aspect is what has made the time at Liberty truly memorable.

“I’ve met people from all over the U.S. — there are some from Colorado, Utah, Ohio — and everybody is just great,” he said.

“I like meeting new people from all over; that is amazing to me,” she said. “Everyone has different experiences, and all of the ROTC programs are different so it is giving me ideas to bring back.”

She said she’s always wanted to go into the Air Force and that the program has encouraged her to consider a career in aviation.

“The entire experience is amazing,” Schindler said. “I love flying, and my favorite thing is doing the landings because there are different landings that you can do, which I didn’t know about. It’s really fun; it’s all just really great.”