Three Liberty University students and a professor are collaborating with the new Museum of the Bible in Washington, D.C., and the Institute for New Testament Textual Research at the University of Münster in Germany to transcribe ancient Greek manuscripts. 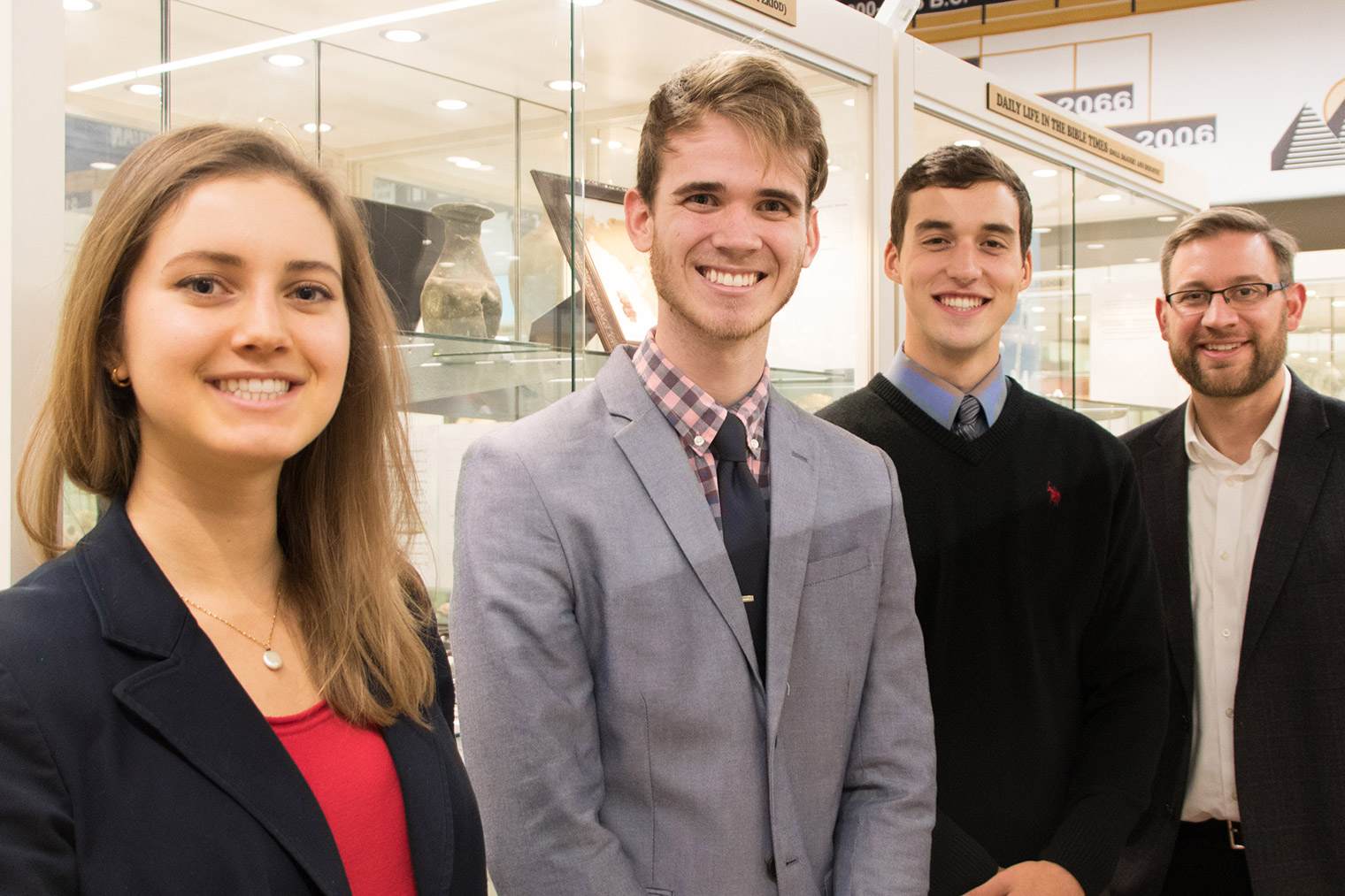 The work is part of the Greek Paul Project, an international effort to produce a modern critical edition of 1 Timothy. Graduate student Elijah Romick, senior Casey Olson, and senior Nate Holland have been working under the supervision of Rawlings School of Divinity Assistant Professor of Biblical Studies Dr. Benjamin Laird since last fall, transcribing 15 Greek manuscripts, most of which were produced between the 10th century and the invention of the printing press in the 15th century. Through the Institute for New Testament Textual Research in Münster, digital images of each manuscript have been made available to students.

The texts were obtained by the Institute for New Testament Textual Research, where they are now housed, and sent electronically to Liberty.

The project is supported by the Scholars Initiative, the academic research wing of the Museum of the Bible. Once the students have completed their transcriptions at the end of the semester, biblical scholars will have a clearer picture of the state of the text of 1 Timothy over an extended period of time as they will have access to the text of a wider body of manuscripts.

“The students involved in the project develop an appreciation for how the Bible has been preserved throughout the centuries,” Laird said. “Their work will enable us to develop a more informed picture of the Greek text at various periods of time.”

Laird added that the project helps “fill in that gap” from the original writings to the Bible we read today.

“Today we open up the New Testament and don’t often realize the various steps that had to take place for Greek writings composed during the first century to appear in English in the twenty-first century. The Bible could not have been translated into English were it not for its preservation over the centuries.”

The students have worked around their classes and schoolwork in order to be part of the project, sometimes spending hours on one manuscript if the handwriting was unclear.

“There was a bit of a learning curve at first because in these Greek texts there are a lot of abbreviations, a lot of changes to the way letters are written,” Olson said. “Sometimes the letters are very ambiguous, so it can be hard to decipher if it is one letter or another. But in the end, doing this project has really broadened my horizons.”

They said that the Greek language classes they took at Liberty helped develop their transcription abilities and that the hands-on experience with the Greek Paul Project gave them a larger appreciation for the scribes’ work.

“Without my Greek classes at Liberty, it would be nearly impossible to be able to translate and transcribe this text,” Holland said.

“I’ve really learned to value the whole process of transcription and textual criticism,” Romick added. “It is really important to study the original languages, and, by doing this, it has just made me want to study and analyze more original biblical texts.”

In the future, Laird plans on traveling to Münster to conduct personal studies through a grant he received from the Center for Research & Scholarship. He said the manuscripts that his students are transcribing are the same types of ancient documents that he will have access to while at the institute. He plans to continue the Greek Paul Project with other students next fall, working with another Pauline epistle.