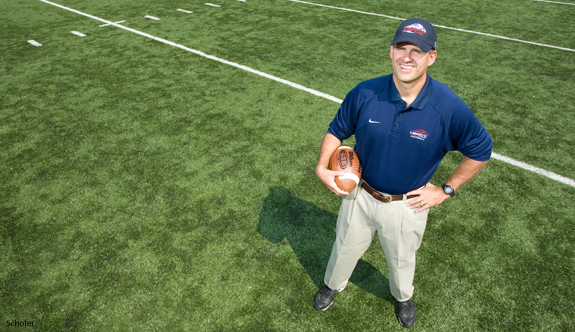 Following a fourth-straight Big South championship football season, Liberty's Head Coach Danny Rocco has been named a finalist in the Liberty Mutual Coach of the Year contest, joining four other elite Football Championship Subdivision coaches up for the honor in the I-AA category.

This is the third-straight year Rocco has been a finalist for the coaching honor, making him the first FCS coach in the country to be named a finalist three times.

The finalists were determined as a result of online fan voting at www.coachoftheyear.com and through an objective scoring model endorsed by the College Football Hall of Fame. Rocco qualified for the model by finishing among the Top 15 in fan votes in the FCS division. The model considers, among other criteria: wins, team penalties, on-field sportsmanship, academic achievement by his student-athletes and civic and philanthropic endeavors.

If Rocco were to win this year's award, Liberty Mutual will award Rocco $50,000 to donate to the charity of his choice and a $20,000 grant to the Liberty University Alumni Association for student scholarships and activities. Winners will be announced Jan. 10, 2011, in Scottsdale, Ariz., in advance of the Bowl Championship Series national title game.

"Coach Rocco is a great candidate for the Liberty Mutual Coach of the Year Award," said Greg Gordon, Liberty Mutual senior vice president of Consumer Marketing. "The passionate Liberty fans and alumni have suitably honored his coaching excellence, his dedication to student-athletes and his commitment to community by casting votes and sharing anecdotes about his contributions, both on and off the field."

Through Dec. 28, fans can visit www.coachoftheyear.com to vote. The final fan vote constitutes 20 percent of a coach's final score toward this year's award.