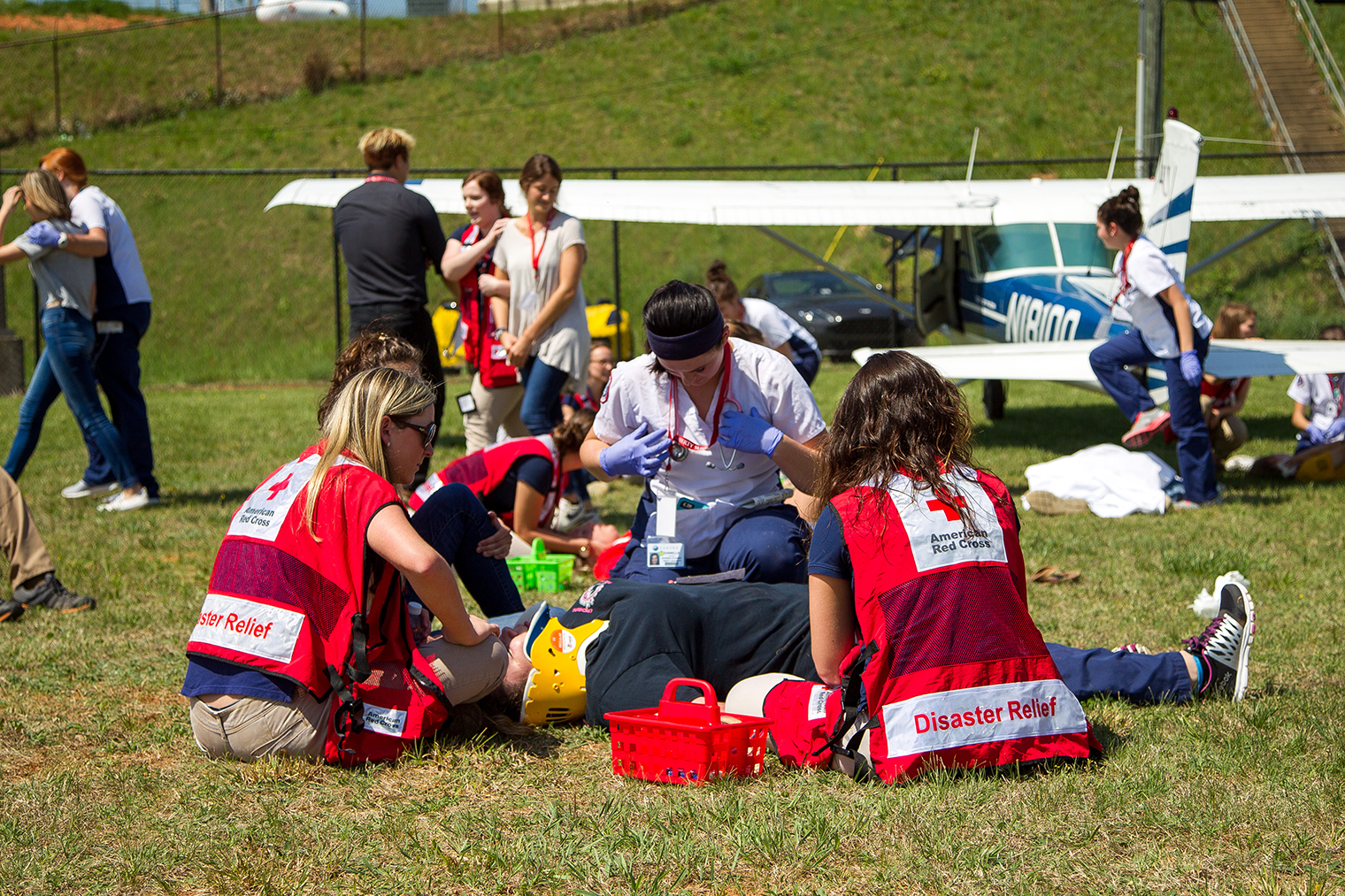 A siren blared at Lynchburg Regional Airport late Thursday morning, prompting a group of Liberty University School of Nursing students to rush across a field just off the tarmac and assess the condition of about a dozen students acting as victims of a simulated plane crash.

In a command center at the nearby School of Aeronautics, students worked with dispatchers to unravel strings of information, sorting out the facts of the case from misinformation and to communicate accordingly to personnel on the field. The fictional scenario involved a small plane crashing into a group of spectators.

At the scene — where victims, applied with realistic-looking injuries, sprawled around a parked single-engine aircraft — aeronautics students implemented their crisis management plan, as nursing students posing as Red Cross volunteers offered support to classmates serving as first-responders. Medical supplies, including bandages, neck braces, and stretchers, were utilized with careful haste. Patients determined to be OK were whisked off to a Red Cross canopy tent to receive emotional support. An LU Shepherd (a member of Liberty’s Spiritual Development staff) was on hand to offer crisis counseling tips. 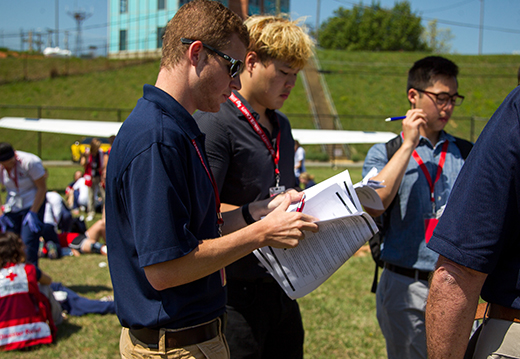 Taking it all in, senior aviation administration student Cameron Row said the setting helped him snap into the right mindset to get the job done.

“Having an actual aircraft here and having all the departments come together made it feel very lifelike,” he said. “When everyone does come together, you see how it actually should happen, how everything works together, and how you are able to assist people. You learn both from what you have done well and from what you need to improve on.”

In all, about 60 people came together during the simulation. It originated in a safety management systems course, led by Dr. Mitch Morrison, chair of Aviation Management & Flight, where students put together a generic crisis response plan. Morrison wanted to include a “hands-on incident management response” activity and reached out to the School of Nursing, where Assistant Professor Dr. Dana Woody teaches a class about first responders. Together they worked to develop a simulation that would support learning goals for both parties. 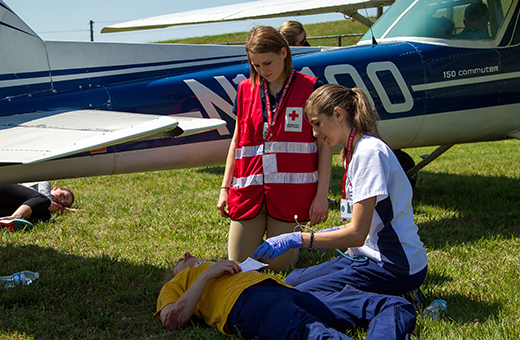 “It was multiple learning situations, different classes and departments coming together,” Morrison said. “It is really valuable because we can take a step back and see what it would be like and how the students would respond if they got that call. How would they communicate with the media, with the dean; how would they keep composed?”

Morrison said he was pleased with how the event went for a first try. He hopes to include more departments next year.

“It was neat to see everyone come together and learn,” he said. “Liberty is such a great place that we can be able to do this. God is so good to provide us with the resources and great people.”

Senior nursing student Chelsea O’Neil said this was a great opportunity for nurses to get outside of the clinical setting and see how first responders act.

“It always makes it more complicated the more layers you have,” O’Neil said. “This is a great way to have (various degree programs) collaborate with each other because that is what we are going to be doing in the real world when we get into these situations. This was a mock of what could really happen if we were each in our (chosen) professions.”

“As a nurse, you are not just going to be working with one patient,” added senior nursing student Carson Philo. “You are working with family members and a lot of times with first responders, police officers. It is important for nurses who have to come to the scenes to know what collaboration with other people is like.”

She said drills help students learn in a different way than they learn in the classroom.

“I think it is great that we got to pair up with another school and do a simulation like this,” Philo said. “I think it is a bigger learning opportunity for people because you are actually hands-on.” 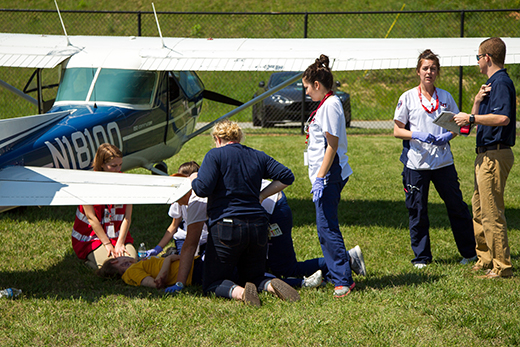 O’Neil added that even though it was a simulation, students were tested in a high-pressure situation.

“It is another tool in our belts to help make us better nurses,” she said.

Row, who is planning to work in aviation management, said the drill was a good way to mentally prepare him for responding to a situation in real life.

“It is extremely important. When you are thrown into it for real the first time, it will be a lot harder if you haven’t had a practice drill,” he said.

Making the setting feel realistic, with support from other departments, made the drill a more valuable experience, Row added.

“If you didn’t have everyone, something would slack, and you wouldn’t really see how the gears all turn together. This will definitely prepare us and allows us to have a behind-the-scenes look, then debrief what happened and learn what we can improve from it.”